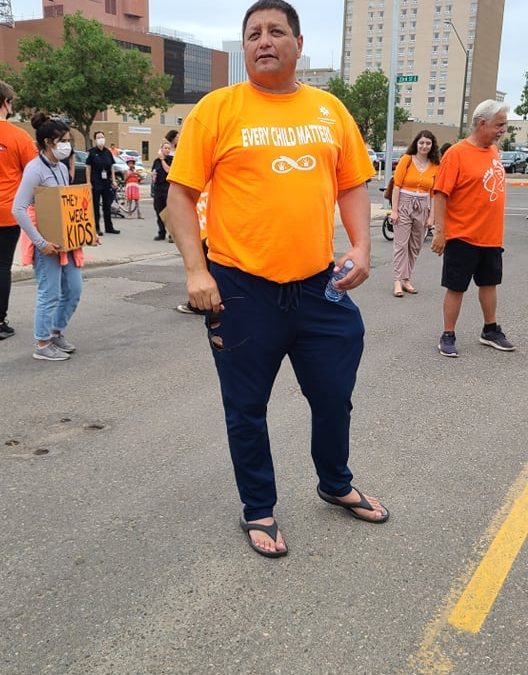 The Saskatoon Tribal Council (STC) is continuing their work to raise awareness about the importance of advancing reconciliation.

Tuesday in Saskatoon, the STC put on a walk which brought out 300 people from various groups and organizations.

Tribal Chief Mark Arcand said they were happy to get support from a range of people and organizations.

“The numerous, I’ll say numerous, because, there was quite a bit of different organizations that came out to support, whether it was their staff, their CEO, their president what ever it may be, was overwhelming,” he said.

Arcand explained the Tuesday walk was a continuation of a walk which he did in the city last month. The aim of both walks was to raise awareness about residential schools and the Truth and Reconciliation Calls to Action.

Among the attendees were Saskatoon Mayor Charlie Clark and people representing a range of organizations including the Roman Catholic Diocese of Saskatoon, Saskatoon Fire Department, Elizabeth Fry Society and Aboriginal Friendship Centres of Saskatchewan.

Representatives of the Catholic community were among those to participate in the Saskatoon Tribal Council "TRC Calls to Action Awareness and Education Walk" today in Saskatoon. pic.twitter.com/qo31XOKw94

The tribal chief said the recent event where a racist sign was hung on the lands of the Muskoday First Nation shows there still is racism and hatred directed at Indigenous people which needs to dealt with.

“We want to continue the work of having people understand and, you know, really work together so all people can have a quality of life,” said Arcand.

When it comes to moving forward and how people can help, Arcand explained they should be listening to elders who are providing direction. He added guidance from elders is central to the work he is doing and pursuing.

“I asked elders, what I should be doing with my work in Saskatoon and they said to continue to build unity, to be united,” he said.

The STC is currently working to plan similar events in August and September. The details on these future events are still being worked out. This includes ensuring proper protocols are followed.

Along with raising awareness, Arcand said they have been approached by organizations looking to do their own calls to action. One of those groups is a construction company that is looking to work with STC to hire Indigenous people to work for them.

“Those types of situations are going to help Indigenous people so they can help their children and they can have a quality of life and that’s the end goal for me,” he said.