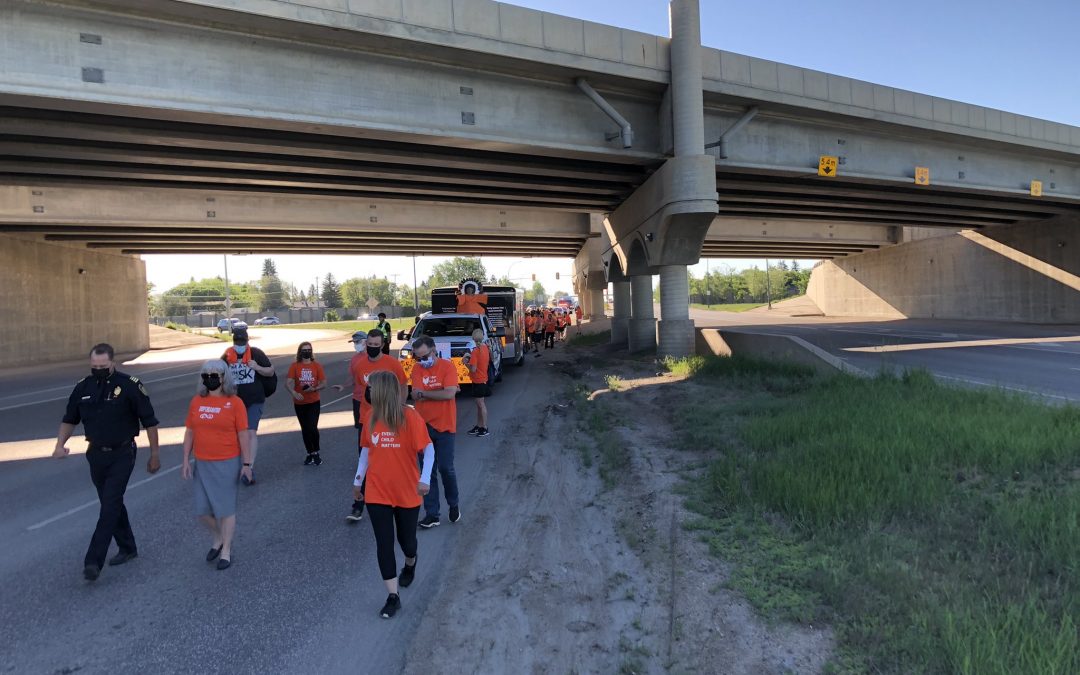 The Saskatoon Tribal Council (STC) is looking to get people talking about the importance of implementing the Truth and Reconciliation Commission (TRC) calls to action.

On Monday tribal council chief Mark Arcand walked in Saskatoon along circle drive to raise awareness about the importance of reconciliation.

The walk started off at the tribal council’s offices before heading west on College Drive, than west down Circle Drive. Arcand explained before the walk he consulted with elders to ensure proper ceremonial protocols were followed.

“That’s how we do things in the cultural way is always start to our left,” he said.

A number of groups and organizations showed up to the tribal council’s office to start the walk with Arcand. They included representatives from the City of Saskatoon, the University of Saskatchewan and the local business community.

Arcand said it is important that people from a variety of different walks of life were part of the walk and heard about the importance of reconciliation.

“So we can change the system that’s been negatively impacting our people for generations to come and that’s why the residential school survivors told their stories to the TRC,” he said.

Arcand added he hopes organizations and groups will look at the TRC calls to action and work to implement recommendations which are relevant to their specific organizations.

Having the business community involved is something Arcand believes is important. He said there are a number of business that are committed to working to hire Indigenous people as their call to action.

“They’re going to change that person’s life and that family’s life so they’re children don’t have to live in poverty or neglect anymore because they can’t get a job,” he said.

Looking at Saskatoon specifically, Arcand said he feels the city is doing well when compared with other places. He added organizations like Reconciliation Saskatoon have done good work bringing people together.

“We lead probably in the province and in across Canada in my view, we have probably 100 plus organizations part of Reconciliation Saskatoon,” he said.

Overall Arcand said the walk received a positive response, with many people honking their car horns as they drove by. He added they’re still some negative attitudes out in the public but said the focus is on reaching out to those interested in working with STC.