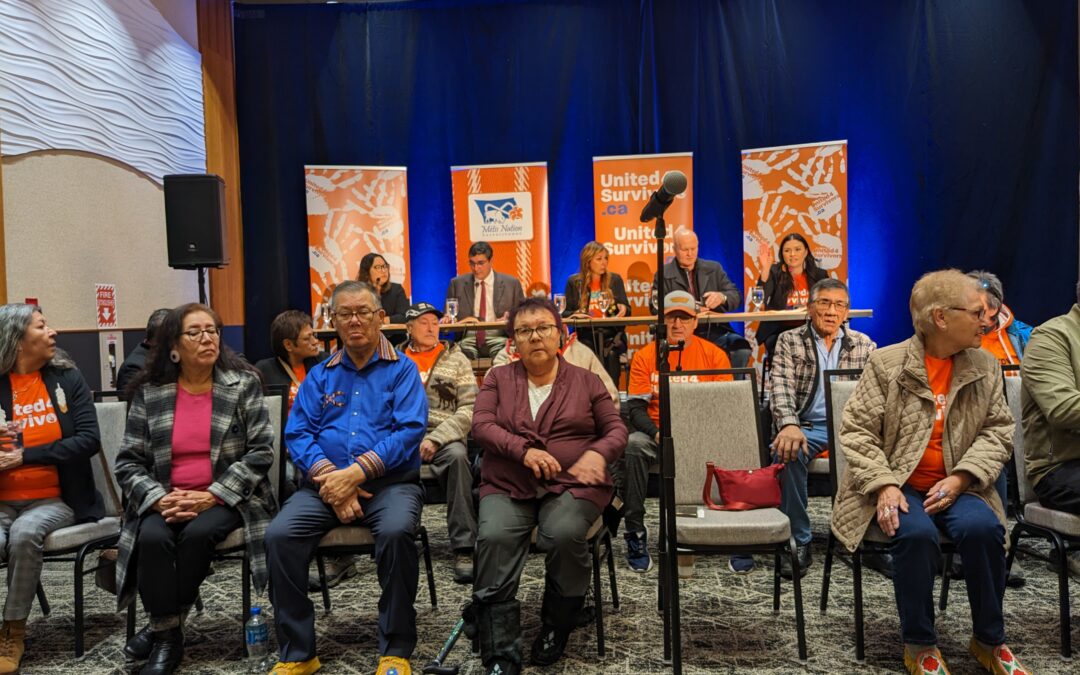 Survivors of the Ile a la Crosse boarding school are taking their matter to the courts again.

Six survivors and intergenerational survivors of the boarding school are seeking compensation from both the provincial and federal governments for the harms they say happened at the school.

For years, individuals who attended the school and their families have been lobbying governments to recognize the institution as a residential school, but the government has refused saying the school was not run by the government.

Now survivors want the courts to decide, as a lawsuit was filed in the court of Kings Bench last month.

At an event in Saskatoon Tuesday morning the survivors announced their new lawsuit with full support of the Metis Nation-Saskatchewan and the Ile a la Crosse Survivors Committee.

“I hope, that by bringing forward this lawsuit, that the survivoers of Ile a la Crosse will finally receive the justice that we deserve and that our truth will be heard,” said plaintiff and survivor Louis Gardiner. “We lost our language, our culture, and our identity at the school. We deserve justice and recognition moving forward.”

Gardiner attended the school from 1961-1969 and believes the school should carry the same legacy and compensation from all the other residential schools across Canada.

“We suffered the same as anyone who attended any other residential school,” he said.

“(Survivors) had the same experiences of any other residential school in this country,” echoed intergenerational survivor Duane Favel who is also one of the plaintiffs. “From that persepective it is heartbreaking to know we continue to struggle to get recognized as a Metis residential school.”

In the lawsuit, the plaintiffs speak of what they say were inhumane conditions at the school and physical, sexual, and emotional abuse they claim was was perpetrated by the school staff.

The Ile a la Crosse boarding school was opened in the 1870s by Roman Catholic missionairies. The school closed in the 1970s.

(An archival photo of the Ile a la Crosse Boarding School.)

In 2005, survivors filed a class action lawsuit citing the same abuses and concerns in this most recent lawsuit.

A legal representative for this new lawsuit says the previous lawsuit has not progressed in several years. The Plaintiffs are now hoping this new lawsuit dubbed the “Gardiner Claim”, after survivor Louis Gardiner, will now become the main legal effort for survivors of the school.

In 2019, the federal government and the Métis-Nation Saskatchewan signed a memorandum of understanding, committing parties to exploratory discussions to address the legacy of the Île-à-la-Crosse boarding school. The province was not involved in the signing, although there was a placeholder inviting them.

When asked about this MOU the plaintiffs believe this will not affect that agreement with Ottawa and they say the lawsuit is a way to invite the provincial govenrnment ot the table.

Duane Favel says it is time for both levels of government to work with survivors and their familities.

“Surivors and their families desrve recognition, justice, and compensations,” he said. “Survivors are dying and we are losing time… the time to act is now.”

During Tuesday morning’s media event, one area that was brought up by both plantiffs and dignitaries was the intergenerational effect the school had on the community.

The lawsuit also has the full support of the Metis Nation-Saskatchewan, who are also putting financial backing into the lawsuit.

“Metis survivors have neem demied the benefits of Indian Residential School settlements, including both the compensation and apologies that other survivors have received,” said MN-S Vice-President Michelle LeClair.

A statement of defence has not yet been filed.

(TOP PHOTO: Survivors and dignitaries gather to speak on a new lawsuit against both the federal and provincial governments on the Ile a la Crosse Boarding School.  Photo by Joel Willick.)