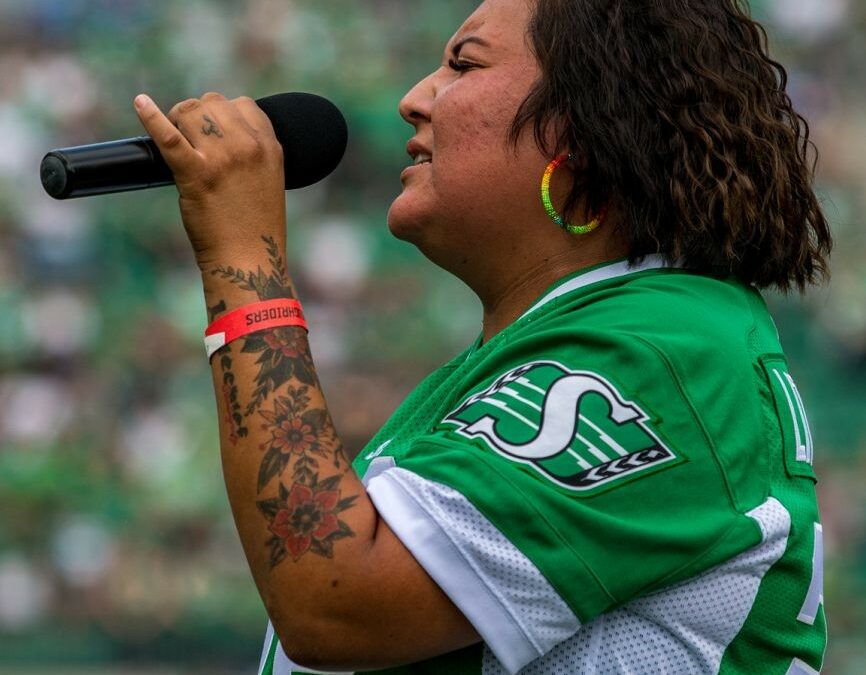 Before the 109th Grey Cup kicks off on November 20 in Regina those watching will hear Canada’s national anthem sung in three different languages.

On Wednesday it was announced that Teagan Littlechief, who is from White Bear First Nation, will be singing the national anthem and doing so in English, French and Cree. Speaking with MBC Radio News Littlechief said getting the chance to perform the national anthem at the Grey Cup is something she has been hopping to do for some time.

“It’s been about ten years that I’ve wanted to sing at Grey Cup and I always told myself, one day, maybe one day, I’ll be able to,” she said.

The national anthem will be performed in Cree, English and French!

Littlechief explained her name got put forward as someone who could perform the anthem at the game by Edmund Bellegarde, who is with the File Hills Qu’Appelle Tribal Council (FHQ), there were also fans of hers who were suggesting her as a possible anthem singer. Littlechief said getting the call that she had been chosen to sing the anthem was an emotionally moment.

“I freaked out, I cried a little of coarse,” she said.

Since being chosen Littlechief has been working on her rendition of the anthem which has involved working with a Cree teacher and doing other research to prepare herself for the performance. She has sung the national anthem at Saskatchewan Roughriders games and at Regina Pats games in the past, but those performances were only in English.

Littlechief added her knowledge of the Cree language is limited, but she did take some French language classes in school, which has helped her somewhat with that portion of the rendition.

“I’ve been practicing the English part, the French part and the Cree part and its going to be very interesting and I just hope the crowd likes it,” she said.

Currently Littlechief is travelling, so she has not been able to speak with many people at White Bear to get their reactions, she said she has heard from some family members, who have offered their congratulations. Overall Littlechief said she is happy about being able to perform the national anthem in three different languages on such a large stage.

“It’s just an overwhelming feeling of appreciation, you know, love and everything for my supporters,” she said.