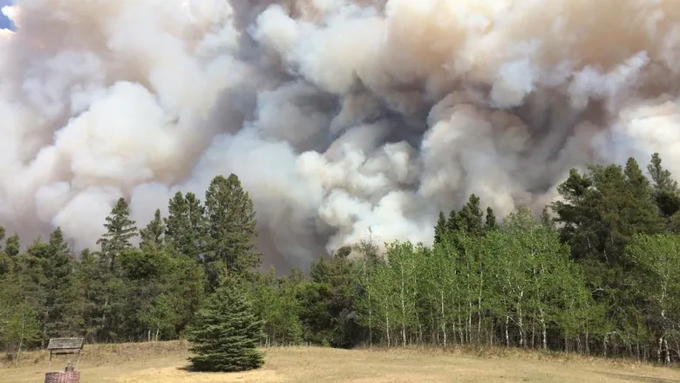 Investigators have determined the cause of the Cloverdale Fire.

The investigation which involved the Prince Albert Fire Department, Ministry of Environment and Saskatchewan Public Safety Agency found a lightning strike was the cause.

Quentin Rowland, a fire inspector and investigator with the P.A. Fire Department explained a few days into the investigation the team got a break when they were given a photograph which helped them find where the fire originated.

“Luckily we had some photo evidence that was taken, that we got on the 20th that showed a picture, basically the early stages, that was taken probably about 10-15 minutes after the initial reporting of the fire,” he said.

“Those things were all fairly easy to eliminate,” he said.

At the scene investigators were able to zero in on the exact tree. Rowland said the tree that was struck had an eight to ten foot area around it where the soil was a different color when compared with the soil in the rest of the area.

“That kind of indicated that the fire had been going quite intensely for quite some time,” he said.

The bark on the tree had also been blown off which is also indicative of being hit by lightning. Rowland said investigators dug down to look at the roots of the tree where they found the roots were charred which was further proof of a lightning strike being the source.

“A lightning strike hit the tree and the roots were smoldering for probably a day or two until the conditions were right for it to start to accelerate,” he said.

Investigators also spoke to people living in the area and found a person living on an acreage, who said they saw a lightning strike a few days before the fire broke out. Rowland said it is not uncommon for a fire to start in this manner.

“It could be a couple days prior to and then it smolders in the tree roots until the conditions were just right for it to accelerate,” he said.

The Ministry of Environment and Saskatchewan Public Safety Agency refered comment to the P.A. Fire Department.