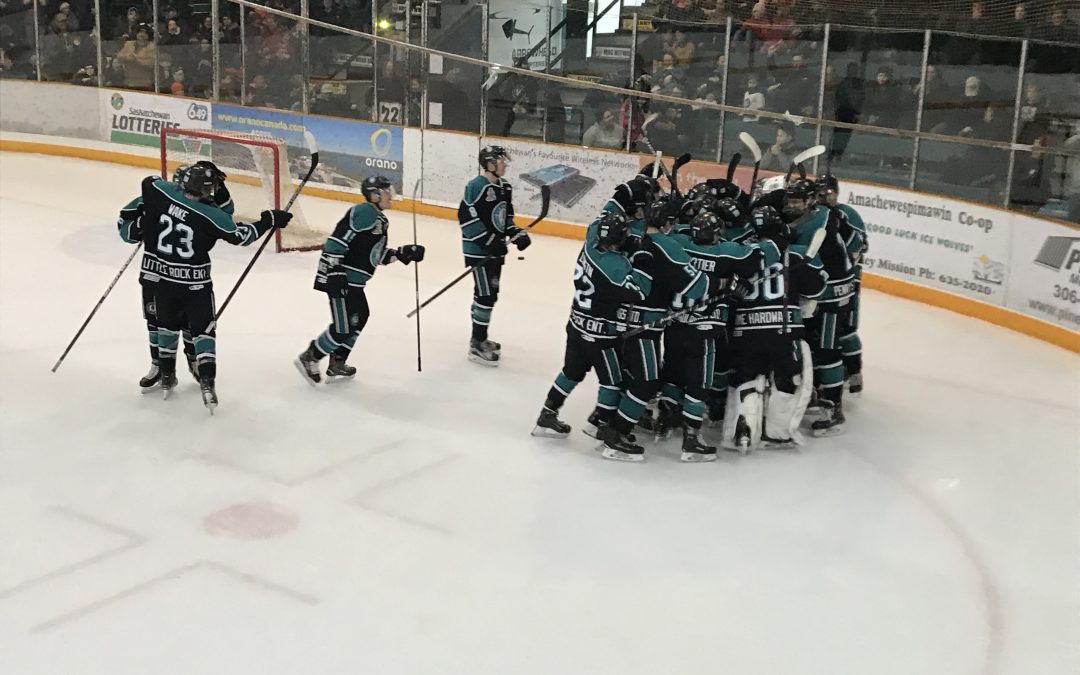 The La Ronge Ice Wolves ended the 2018-19 season on a positive note Saturday at home when they beat the Flin Flon Bombers 4-3 in a shootout.

The Bombers opened the scoring 13:17 into the first when Alec Cokley batted a puck out of the air in tight past Jordan Frey. The Ice Wolves tied the game at one 17:29 into the stanza when Jordan Mish threw a puck on net that got past Jacob Delorme. Flin Flon pulled ahead 2-1 18:09 into the first when Vaughan Bamford beat Frey from the left point.

The Ice Wolves tied the game at two 14:16 into the second on the power play when Antonio Di Paolo rifled home his 13th of the season upstairs on Delorme.

La Ronge took its first lead of the game 4:35 into the third when Zach Bannister walked out front and slipped the puck on the ice past Delorme for his 28th of the season. Bannister also collected two assists and finished the season with 70 points.

The Bombers tied the game up at three 17:47 into the third on the man advantage when Nate Hooper notched his 25th of the season.

Regulation solved nothing, so the Ice Wolves and Bombers needed overtime and eventually a shootout. Jordan Frey made a sensational diving save in the extra session when he robbed Brandson Hein, who was lurking in the right circle. Frey admits, he doesn’t know how he came up with the stop.

“I don’t even remember getting knocked down,” said La Ronge goaltender Jordan Frey. “I think I just hit the guy when I went to make the first save and it got blocked — and it went right to Hein and I just dove across and threw my glove out.”

Jordan Frey, who made 45 saves for the win, was perfect in the shootout and Zach Bannister scored the only goal of the shootout, as the Ice Wolves improved to 2-2 under Gaelan Patterson, who was named interim head coach last week.

“It was unreal (the win),” said Ice Wolves forward Zach Bannister. “Obviously, we had a big crowd tonight, it’s no better feeling than to get a win with that much excitement in front of your home crowd.”

With the victory, the Ice Wolves finished the season with a 12-44-1-1 record. It’s the third straight season they have missed the post-season, but with a good core eligible to return, the future certainly looks bright.

“It’s obviously positive, right? We’ve got a huge core that are coming back, we only have one 20-year-old, so that means all the guys should be coming back,” said Ice Wolves Interim Head Coach Gaelan Patterson. “We add a few pieces, we can have a real solid team next year and I’m really looking forward to be part of that.”

Meantime, the Ice Wolves will now get set for their year-end banquet next Friday night.