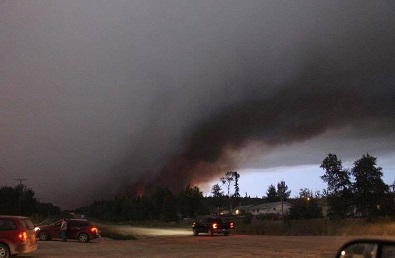 *UPDATE – Peter Ballantyne Cree Nation Vice Chief Harold Linklater is strongly urging everyone to leave Pelican Narrows.  In a notice posted on Facebook shortly before 5 p.m., Wednesday, Linklater notes the current evacuation order is for all community members.  He says that if community members choose to not leave now, they will be on their own and there may not be another opportunity to leave. Linklater says there is no guarantee of phone lines, power, water or other essential services.  Linklater also says community members have brought forward concerns of property theft and vandalism during the evacuation, and says all incidents will be investigated and prosecuted to the full extent of the law where applicable.  He adds an increased RCMP presence and security staff will be providing additional patrols throughout Pelican Narrows.

While a number of wildfires have led to a general evacuation for Pelican Narrows, fire officials say smoke is their biggest concern right now.

There are three fires burning within 20 kilometres of the northeastern community, with one of them – the Preston fire – within three kilometres.

“Bigger communities – because of clearance, everyone clears their property, the edge of town is cleared, roads go aroudnd the town – those provide us significant opportunities to provide better protection for a larger community,” he said, adding that an incident command centre has been set up in Pelican Narrows along with sprinklers and other measures to protect the community’s buildings.

This, he said, is not the case with the smaller communities if Jan Lake and Birch Portage where mandatory evacuations were ordered, because they are “embedded in the forest.”

Fire blocking roads to Pelican Narrows led to a general evacuation order on Tuesday night, but it’s still unclear how many people were able to get away on Wednesday. At last word, evacuation buses were on standby due to the road conditions and 3,000 people still remained in the community.

Emergency Management’s Duane McKay say they will be monitoring what level of risk community members are comfortable with and communicating with government agencies to move quickly if a decision is made for people to leave en masse. At present, it’s smoke not fire risk that has led to evacuations.

Roberts says all of the province’s fire resources are focused on the fires, but two are still listed as uncontained. This is expect to continue for some time.

“We expect with weather conditions, which is wind conditions and heavy unburned fuel, that we will continue to see aggressive fire activity around the clock. And we do not see any huge reprieve from a weather perspective for at least a week so we will be aggressively managing the fires to protect people and infrastructure,” he said.

As for where people will end up if they do choose to leave Pelican, Saskatoon is the final destination for most.

The congregate facility at the Hank Reyes Soccer centre has nearly 500 people there already, and more spaces are available both there and at other facilities. Because of school returning soon in Prince Albert, people headed there will either be in hotels or staying with family.

There is space for up to 600 people in Prince Albert’s hotels.