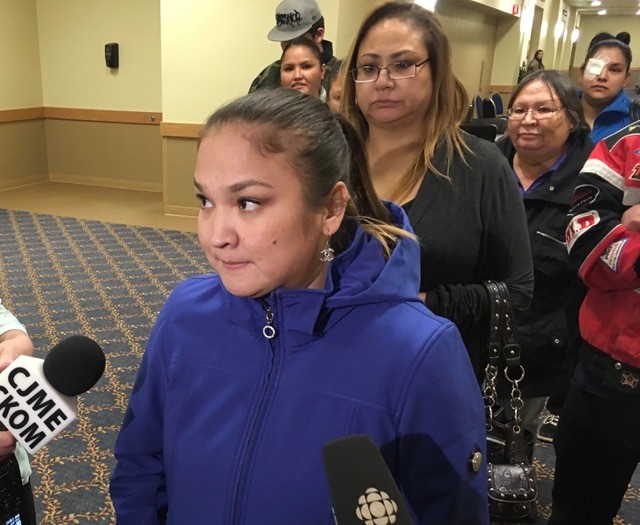 The ruling came after three days of detailed and graphic testimony depicting the devastating injuries she suffered and her high level of drug and alcohol intoxication before she fell more than 100 feet down a laundry chute of the downtown Regina Delta hotel in January of 2015.

There were contradictory findings from the provincial pathologist who at first ruled her death as undetermined.  That was later changed to accidental after a review of his findings by two of Canada’s top toxicologists.  They testified that while Machiskinic would have been severely impaired, she would not have been immobile and would have been capable of climbing into the laundry chute on her own.

That never sat well with Machiskinic’s aunt, Delores Stevenson, who firmly believes someone pushed her into the small laundry chute — which was 24 inches wide, 21 inches tall and was 30 inches off the floor.  It also had a steel door that had to be opened.

Stevenson says the inquest clearly demonstrated a botched investigation and a lack of respect for her niece.

“And I think every person in Canada deserves a fair and just investigation with dignity,” she said. “So I don’t feel Nadine was given that kind of investigation into all of this.”

She goes on to say assumptions were made right from the very start when her niece was found unconscious in the basement laundry room of the hotel.  She says people just assumed she was a passed out Aboriginal woman, with no one considering she might be critically injured and in need of medical attention.

Noah Evanchuk represented the Machiskinic family at the inquest.  He describes Stevenson as a hero.

“When we look at this issue from the lens of missing and murdered Indigenous women, it’s people like Delores Stevenson that is bringing it to light and giving it the attention it deserves and I think she deserves the national spotlight,” he said.

The jury made only one recommendation — that all hotels make sure service areas are kept locked and secure.

The jury was made up of six people, three Aboriginal and three non-Aboriginal.  There were two separate jury pools to ensure an even split.

Their decision did not have to be unanimous, but did require a majority vote.  They were also limited on what recommendations they could make.  They had to relate only to things that could be done to prevent similiar deaths in the future.  It was outside of their authority to make rulings or recommendations on how the investigation was handled.

While the inquest is over, the case is still before the courts.  The Merchant Law Group is representing the Machiskinic family in a negligence lawsuit against the Delta hotel.