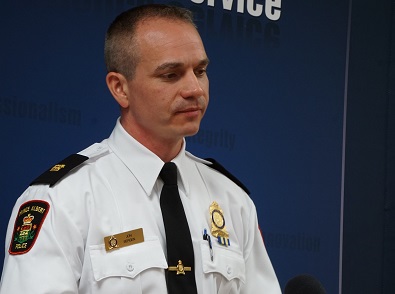 A drug that prevents overdose deaths is gaining ground in Prince Albert.

On Thursday, the city’s police announced 25 police officers have completed training to administer Naloxone, a medication that reverses the life-threatening effects of opioid overdoses. Now, both police and the fire department are equipped with the nasal spray version of Naloxone.

Naloxone has been introduced across the country to specifically address fentanyl, a highly potent drug which is increasingly being laced into other drugs and causing fatalities.

According to current data, the only fentanyl-related death occurred in Prince Albert in 2015. This number is dwarfed by the approximately 100 such deaths in Vancouver in 2016.

“Locally, fentanyl is not as much of a crisis here now. I mean, in saying that, of course the drug distribution from inter-province can happen at any time. But in our own local community we would probably see more dilaudid, morphine, hydromorphone, those types of opioids being used,” said Brett Enns, Vice-President of primary and community services for the Prince Albert Parkland Health Region.

He said Naloxone can be used for any type of opioid overdose, and there are 100 kits available for self-identified high risk opioid drug users who would receive similar training to what the police officers received. Currently, about 15 have been distributed.

Prince Albert police say they made the move now because they wanted to ensure they were acting in line with other police services.

Inspector Jonathan Bergen said not only are they protecting the public, they’re protecting emergency personnel and officers who could possibly come into contact with drug.

Among those, are Prince Albert’s two canine officers.

“We respond for them as well, so we worked with the veterinarian who provided kits and some training and instruction to our dog handlers in the event that they experience an overdose at any time,” Bergen said.

He pointed out there was a major fentanyl seizure in the city in the past year.