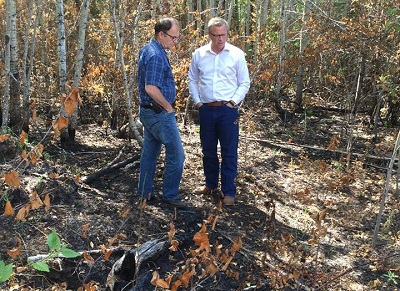 After the prime minister’s visit to La Ronge last week, provincial politicians are making the rounds to other areas where flames were far too close for comfort earlier this month.

On Wednesday, the premier and several ministers hopped on a plane to visit Ile a la Crosse, followed by Pinehouse.

“Some of the areas are just devastated and wiped timber out. And it got frighteningly close to several of the communities,” said government relations minister Jim Reiter.

La Loche was one of their stops, and its mayor Georgina Jolibois has been critical of the government’s actions during the evacuations.

Others have been highly critical of the so-called “let-it burn policy.”

Reiter had previously stated there will be a review of the province’s response to the fire crisis.

He adds that in years past, wildfire management considered forest fires as a natural event that wasn’t battled, but now it’s necessary to satisfy the needs of northern residents during fires.

This includes the effect on traditional activities of hunting and trapping, which came up in roundtable discussions.

“There was a great deal of discussion about that, we’re very sensitive to that. I think probably most of the discussion was in context of, ‘if we make changes to the policy, how will it impact that?’” Reiter said.

But it wasn’t all about what to do during wildfires, they also talked about recovery in the aftermath.

“There’s gonna be some follow-up discussions with our ministry and people that are impacted, you know, not only by timber loss but on what do now in the areas that have been burned,” he said.