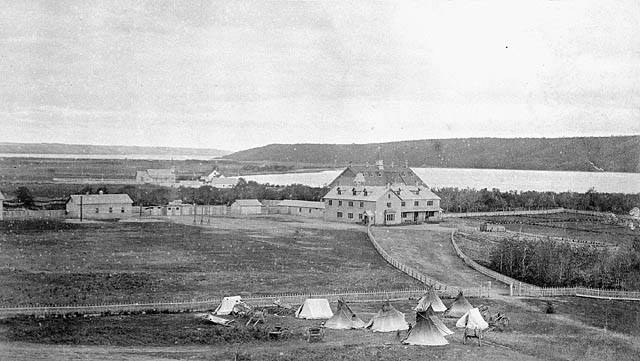 For Geraldine Shingoose, last week’s news of discoveries near a former residential school in Saskatchewan hit hard, because of her own connections to that school, and because she said it is just another example of the horrors her and so many children went through in Canada’s residential school system.

“I met students from Lebret when I was there, I spent a lot of time there, and now to know what they were experiencing that really hits home for me,” Shingoose said.

Shingoose spoke to the Winnipeg Sun on Monday reacting to last week’s announcement by Star Blanket Cree Nation Chief Michael Starr that more than 2,000 anomalies have been discovered in the ground near the former Lebret Indian Industrial School site, and that a jawbone fragment that is believed to be more than 100 years old and from a child between the ages of four and six was also discovered near the site, northeast of the city of Regina.

As a child, Shingoose, who currently lives in Winnipeg, was forced to attend the Muscowequan Indian Residential School in Saskatchewan, located not far from Lebret, and said she and her classmates often travelled to Lebret for track and field, and other sports events.

Shingoose said the abuse she experienced at the school she was forced into was so bad that she actually remembers as a child wishing she could attend Lebret instead.

“It’s funny, but my memories of being there were that I felt more safe than I did at Muscowequan, but thinking back, that might just be because it was so horrible where I was, that I just wanted to be anywhere else,” she said.

“And now I hear about the findings, and I realize I wasn’t aware back then of all that was going on, so it has really shaken me.”

According to Shingoose, the abuses she suffered over many years led to several severe injuries because of hits often from either a strap or a tennis racket, and she said at one point she was hospitalized for over a month because of severe open wounds caused by the strap.

“But people questioned our stories, and this is more clear evidence of what they did to us. The reality of our history is coming out and people need to hear it, because for too long survivors were telling their truths but no one would listen, and no one believed them.”

Shingoose said the importance of sharing survivors’ stories is a reason she continues to tell her story publicly.

“I go to schools and talk to the kids, and I talk at different events about my own experience, and I do it because people need to unlearn whey they learned about the history of Canada, and acknowledge the truth,” she said.

During last week’s announcement, Starr confirmed that additional work needs to be done to determine what each of the discovered anomalies near the former Lebret Indian Industrial School site represents, and said officials do not believe that all anomalies discovered are unmarked graves.

The next steps will include “core sampling” to check for DNA, and to confirm which anomalies might represent unmarked graves, he said.

An Indian Residential School Crisis Line is available 24 hours a day, seven days a week in Canada for anyone experiencing pain or distress as a result of their residential school experience or the experience of someone they know. The crisis line can be reached at 1-866-925-4419.