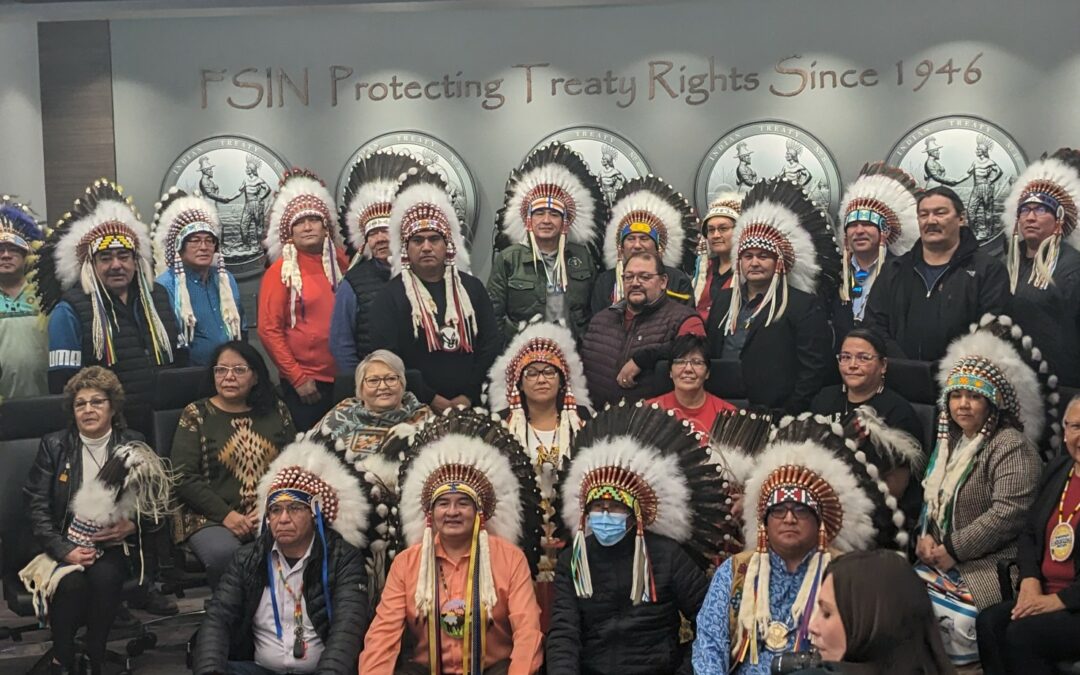 First Nation chiefs from across the province came together at the FSIN offices in Saskatoon on Friday afternoon to stand in solidarity and speak out against what they say is the provincial government’s infringements on First Nations inherent and Treaty rights.

More than 30 chiefs, representing First Nations and tribal councils from across the province, joined members of the FSIN executive to voice their displeasure.

The main area of concern is the Saskatchewan First Act. A piece of legislation First Nation governments and organizations have repeatedly spoke out against since it was first introduced by the Saskatchewan Government this fall.

The following is a list of chiefs who were in attendance at Friday’s press conference:

Many of the the chiefs gathered addressed the Saskatchewan First Act.

While a wide variety of topics were discussed a through-line of many of the speakers was pointing to the fact that treaties predate the province of Saskatchewan by decades and any legislation the province passes in regards to sovereignty must be in full consultation with Indigenous people.

The chiefs also feel a lack of consultation has been undertaken with thee proposed legislation.

In addition, many stated Indigenous people did not give up their rights to resources under the land through treaty with some of the chiefs re-iterating the treaty line “to the depths of a plow.”

The last to speak was FSIN Chief Bobby Cameron who pointed to the many chiefs gathered in the room.

“This shows the public we are united,” said Cameron who wasn’t shy about speaking on potential action to come in the new year.

“We have mandates to move forward politically and legally and we are getting to the point where we might start blockading,” he said.

However, Cameron isn’t buying it.

“Stop saying it doesn’t affect inherent treaty rights…yes it does… and you have heard it from chiefs across Canada,” he said. “We will protect our lands and resources as we see fit. We must put an end to the Saskatchewan First Act.

The province did not provide an immediate response to Friday afternoon’s press conference.

(PHOTO – First Nation Chiefs from across the province come together in solidarity to speak out against the Saskatchewan First Act.)