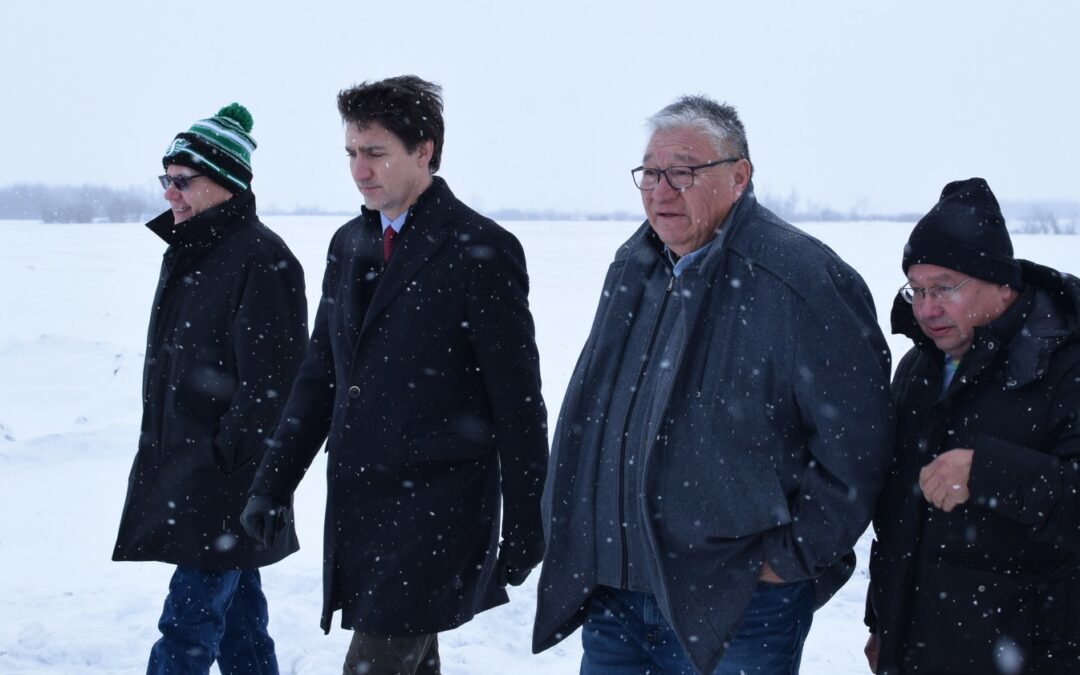 Three months after 11 people were killed and 18 others injured in a stabbing rampage on James Smith Cree Nation and Weldon, Prime Minister Justin Trudeau visited the Cree Nation.

On Monday, the Prime Minister spent the day paying respects to the victims, along with meetings with families and community leaders.

One of the first things Trudeau did when he arrived was to visit the gravesite where some of the victims are buried.

At each gravesite, the prime minister laid tobacco, held a moment of silence and performed the sign of the cross. 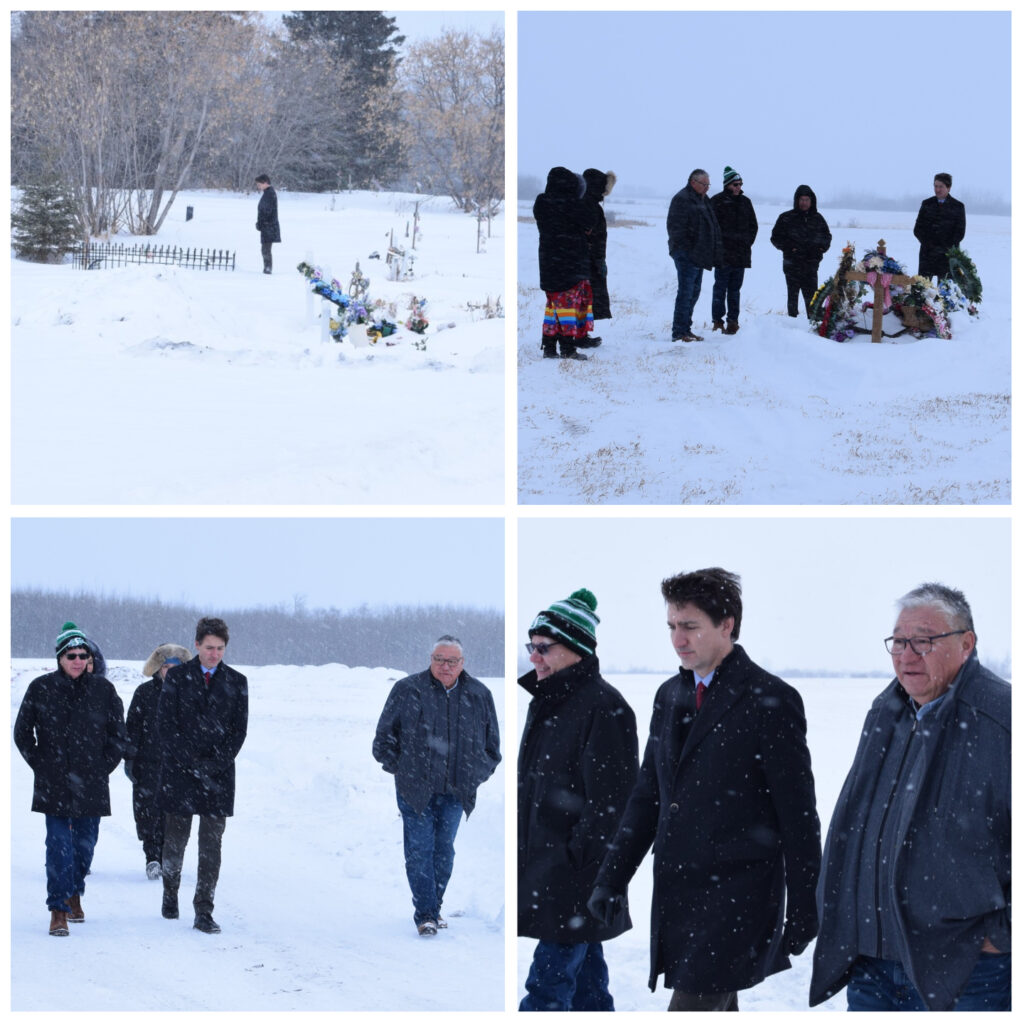 In the afternoon, the Prime Minister met with victim families and community leaders.

After meeting with families Trudeau told a select group of reporters that the government will continue to offer support and assistance to James Smith Cree Naiton.

“The healing process will take a long time and we will be there as partners with you for a long time,” he said.

Trudeau than spoke highly of the way the community has come together in the aftermath of the tragedy, but says the government needs to help build stronger and more resilient communities to ensure this “never happens again.”

James Smith Cree Nation Chief Wally Burns thanked the Prime Minister for coming to the community and says the healing process will need everyone to be involved.

“We have to come together in this healing process, not as one, but as a whole,” the chief said.

Chief Burns then gifted Trudeau an eagle feather and chiefs at the meetings presented the Prime Minister with a Star Blanket. 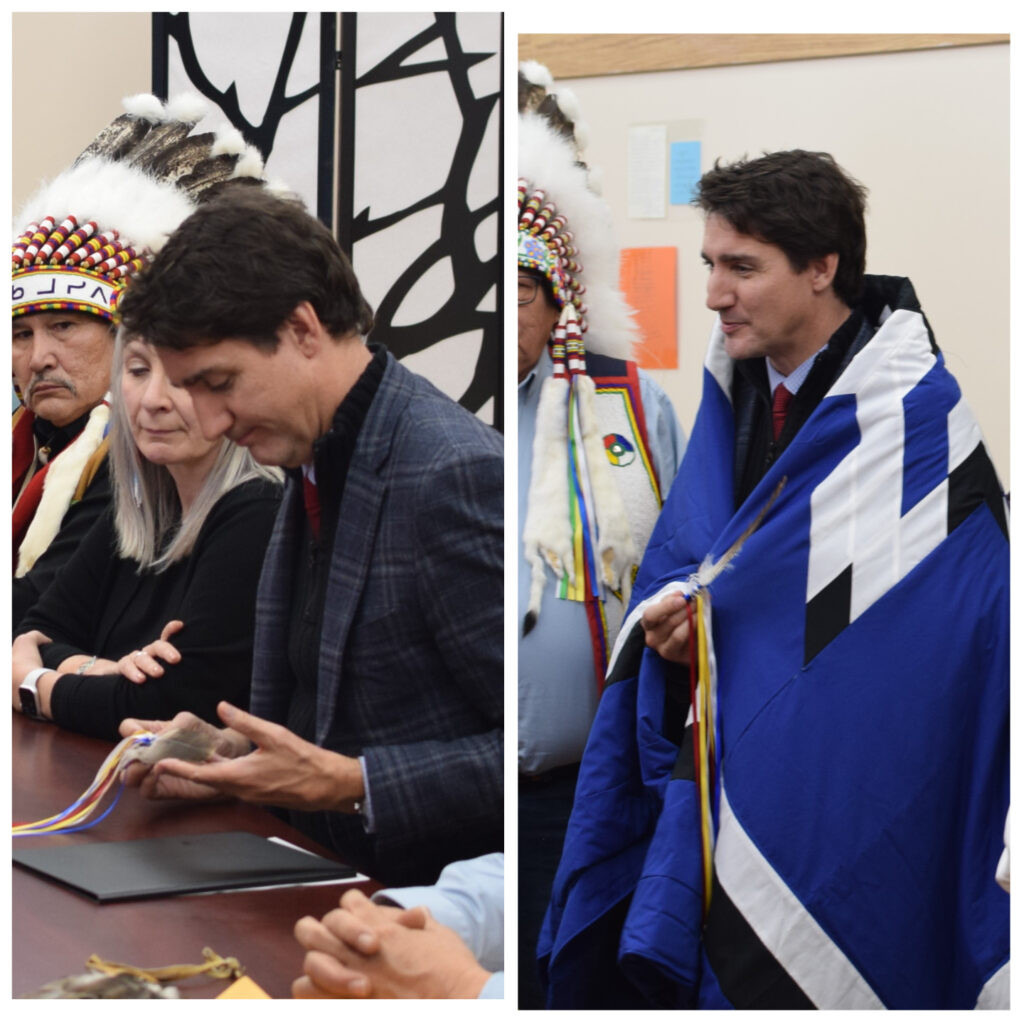 (Prime Minister Justin Trudeau looks at an eagle feather that was just gifted to him by James Smith Cree Nation Chief Wally Burns and receives a Star Blanket from the chiefs gathered at the meetings.  Photos by Joel Willick)

Following a grand entry at the Bernard Constant Community School the Prime Minister announced $40 million in funding over the next four years toward James Smith Cree Nation for the construction of a new wellness centre.

Trudeau says the healing centre will be used to combat addictions and provide mental health support to the community.

“Our government is here for Indigenous communities,” he said.

When asked when construction might begin on this new wellness centre, Chief Wally Burns says they can’t give a definitive time for when construction will begin.  However, he hopes shovels will hit the ground sometime next year. 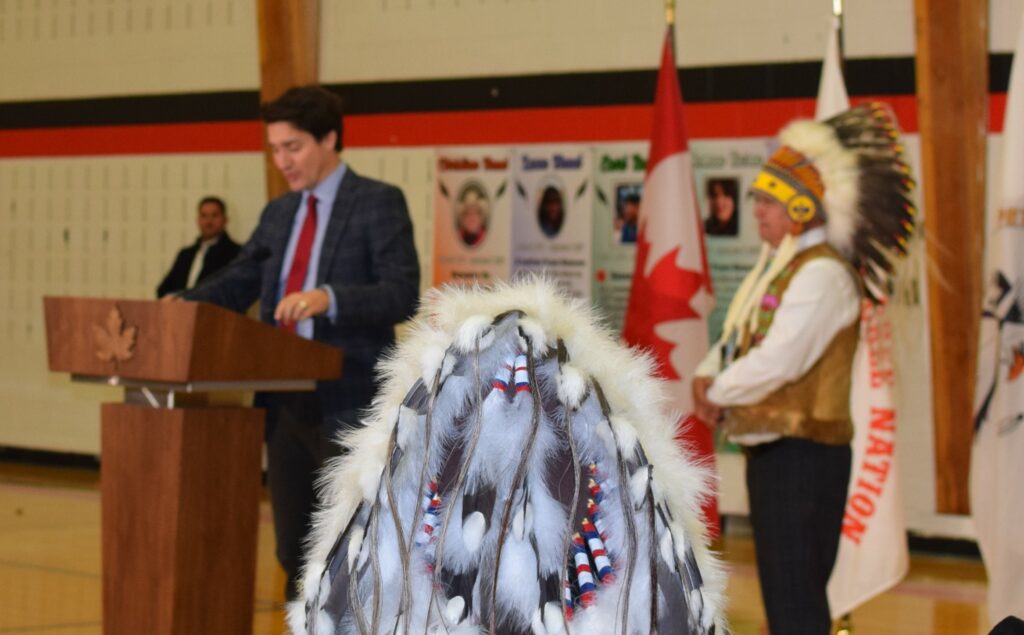 “We are not working just here, we are working across the country.”  Said the prime minister while also saying what works in one community may not work in another.

While Trudeau spoke on First Nations policing, he couldn’t provide any specific announcements just that the government will work toward implementing legislation for Indigenous-led policing on the federal level “as quick as possible.”

The rampage suspect, Myles Sanderson, died while in police custody shortly after he was arrested.  In the coming year, Saskatchewan’s Coroners Service says two inquests will be taking place into the mass stabbing and the in-custody death of the accused.