On the battlefield or in the courts: Chief serves notice to multinational company, Saskatchewan government 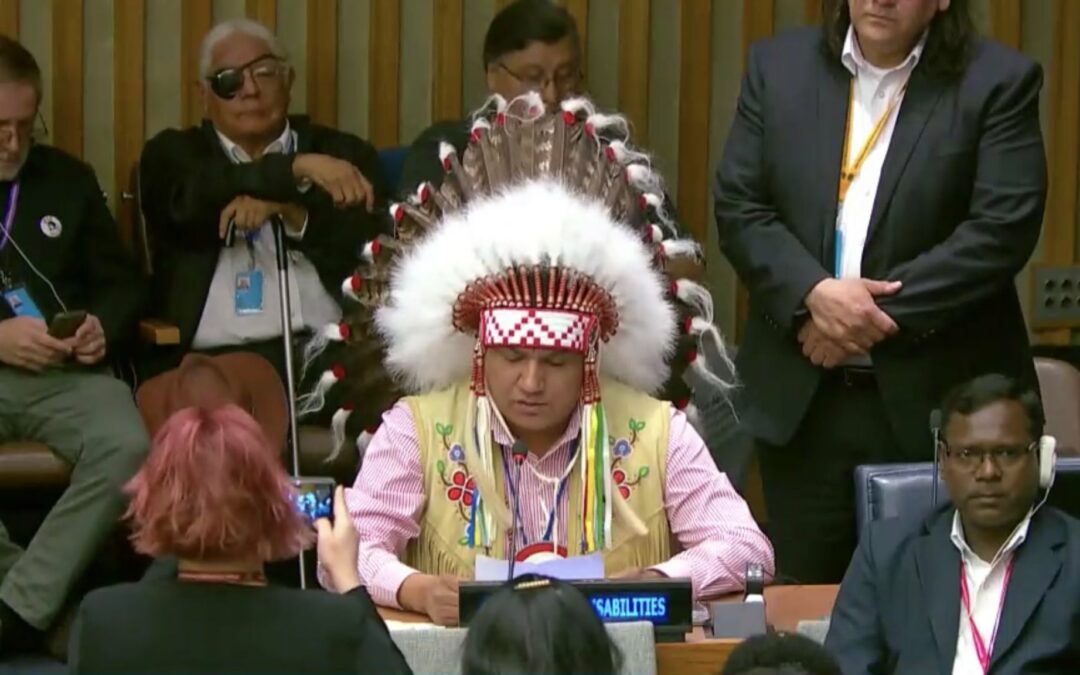 Four days after holding a press conference to call out The Mosaic Company for not working in partnership with his community, Kahkewistahaw First Nation Chief Evan Taypotat is telling the multinational company to “watch and wait” for what’s going to happen next. Taypotat says he will meet Mosaic “on (the) battlefield or see you in courtrooms or see you on the land.”

Mosiac, headquartered in Tampa Bay, Florida, operates a potash mine about 10 kilometres from Kahkewistahaw, which can be seen from the community, yet, brings no benefits to it, said Taypotat.

The chief’s words follow what he calls the company’s “lip service (and) their corporate greed” in Mosaic’s response to the charges the chief has laid against them.

Last Thursday, Taypotat said Mosaic was “completely shut(ting) out” the First Nation’s steel fabrication plant. Members of the First Nation were trained in such trades as welding and pipefitting. The Kihew Fab-Co plant, which also employs local non-Indigenous workers, was established in Melville specifically to do work with Mosaic, said Taypotat.

In a written email to Windspeaker.com last Friday, Nov. 18, Tyler Hopson, government and stakeholder relations manager with Mosaic, said the Kahkewistahaw fabrication shop had been included in the company’s 109 bids for work in the past two years.

“They bid on three and, after working closely with them, we did award them work in 2022 in the hopes that this would lead to a mutually beneficial and long-lasting relationship,” said Hopson.

In an exclusive interview with Windspeaker.com Nov. 21, Taypotat said figures provided by Mosaic were misleading. He confirmed Kihew Fab-Co had been invited to bid on 109 projects, but said 95 per cent was for work not undertaken by the plant.

Kihew Fab-Co was successful in one bid for six pipe stands and produced to Mosaic’s satisfaction. The following month the plant bid on 12 pipe stands, doubling the price from the previous month, he says, and were told by Mosaic that their bid was too high.

“For us that’s just a slap in the face to say that kind of thing. In this day and age on their website (it) says they give back to local communities and First Nation people are on their radar for the work. That’s a lie,” said Taypotat.

Hopson stated in his email last Friday that in 2022, “we wanted to have eight per cent of our spend be with Indigenous vendors and we have met that target…Our goal is to have that number to 15 per cent by 2025 and we make progress every year on this one.”

Taypotat took exception to those numbers too, saying little of that has come to his Nation, which received only $5,000 four or five years ago for its minor hockey program.

“Five thousand dollars compared to the billions of dollars they’re extracting is a slap in the face,” he said.

In a Nov. 7 news release, Mosaic reported its third quarter revenues were up 56 per cent year-over-year to $5.3 billion. It also reported potash operating earnings totaled $793 million, up from $220 million in the prior year period. Mosaic returned $1.8 billion to shareholders during the first nine months of 2022.

Taypotat says it’s time for Mosaic to “start putting their money where their mouth is instead of running their mouths saying they’re doing stuff right now.”

Taypotat says even though members of his Nation travelled to Tampa Bay to meet with company officials, and company representatives also made the trip to Saskatchewan to tour the steel fabrication plant in Melville, nothing meaningful came from either trip.

“The relationship is dead until they start doing what they say they’re doing,” said Taypotat and that starts with “stop lying. They can bring their asses back to the table with their deep pockets.”

Taypotat admits Kahkewistahaw First Nation can’t control Mosaic re-engaging with them but that doesn’t mean they’ll do nothing.

“I’m 43 years old. I have another 43 years left on this earth and if they want to fight for those 43 years, let’s rock and roll because my people deserve better…I have many Elders who are leaving for the spirit world and they’ve been pissed on all their lives by our governments, and that stops here and that stops now with our actions.

“Actions speak louder than words. So Mosaic can just watch and wait and they’ll react or they can come back to the table as true partners and help out the local Indigenous and Saskatchewan population,” said Taypotat.

He adds that Mosaic is “completely out of step” with environmental, social, and governance (ESG) investing and “basic Indigenous engagement.”

“The Mosaic shareholders should be very concerned about this ineptitude,” said Taypotat.

The chief also called out Premier Scott Moe and his Saskatchewan Party government for failing First Nations and Saskatchewan residents by allowing Mosaic to take their work outside of the province rather than support businesses in the province. The chief said he had spoken directly to the premier about his party’s failures with Mosaic.

Moe was also condemned for the proposed Saskatchewan First Act.

Kahkewistahaw has engaged legal counsel Malcolm Macpherson, a partner with Clark Wilson LLP from British Columbia, to challenge Moe on the legislation that was introduced Nov. 1 “to confirm Saskatchewan’s autonomy and exclusive jurisdiction over its natural resources,” said the government.

The Federation of Sovereign Indigenous Nations (FSIN) called the proposed legislation “a direct threat to First Nations inherent and Treaty rights” which are recognized in Section 35 of the Constitution and noted no consultation had taken place with First Nations.

In a Nov. 2 statement, FSIN Chief Bobby Cameron stated, “Resource revenue sharing with First Nations must be implemented for First Nations to benefit form the resource wealth generated in our Treaty and traditional territories.”

Macpherson slammed Saskatchewan for being “20 years behind” British Columbia which, in November 2019, became the only province to legislate the United Nations Declaration on the Rights of Indigenous Peoples.

He said the Saskatchewan government talked about being committed to recognizing Aboriginal and treaty rights and working toward reconciliation, but at the same time it “actively seeks exclusivity in Saskatchewan’s natural resources.”

The province can’t have it both ways, said Macpherson.

“Kahkewistahaw and the other nations in Saskatchewan are co-owners of the abundant natural resources in their territories. Everyone knows this. And it’s time for the large corporations and the province of Saskatchewan to do the right thing. It’s time for royalty sharing and meaningful economic inclusion,” said Macpherson.

He stressed that Kahkewistahaw had never ceded its natural resources and that the First Nation was not opposed to resource development in their “proverbial backyard” but wanted to be a partner.

Macpherson said at this point, Kahkewistahaw was not looking at legal action, but was ensuring the issue remained “in the public sphere” and that amendments were made to the proposed act to recognize the existence of Indigenous rights and that the claim to exclusivity does not impact Indigenous rights.

“Premier Scott Moe, the Saskatchewan Party, Mosaic…enough is enough and we will not go away. I will, we will, defend our people,” said Taypotat.