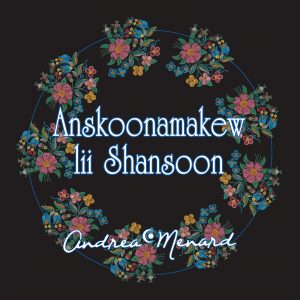 A new Michif music album is set for a launch party Friday night in Saskatoon.

Andrea Menard is a Metis Singer-songwriter from St. Luarent Manitoba. Her latest and fifth album entitled Anskoonamakew lii Shansoon has been recorded entirely in the Michif language.

“I traveled across the homeland over the last year working with language keepers and elders, and I created 12 new songs that I’m really proud of,” she said. “And the whole purpose of the album was to create an album in the Michif language so that we can help preserve it for all the future language keepers out there to learn the language better.”

Says this is the first album to record in Michif and Menard admits she is a novice in the language, but says putting the language into song with the guidance of elders was a “labour of love.”

“These songs are my contribution to our people, our nation, to the language learners of the future, and to the elders who are leaving who are worried about this language continue.

The album will be made available for free and is being launched in partnership with the Gabriel Dumont Institute.

“These songs by Menard reflect the diversity and ways in which Michif has been influenced across the Homeland,” said Karon Shmon, Director of GDI Culture & Heritage Department, in a statement about the album.

The launch party for Anskoonamakew lii Shansoon will take place at Station 20 West in Saskatoon on Friday night and will feature performances by both Menard and Donny Parenteau.

Following the event the album will be available for download.