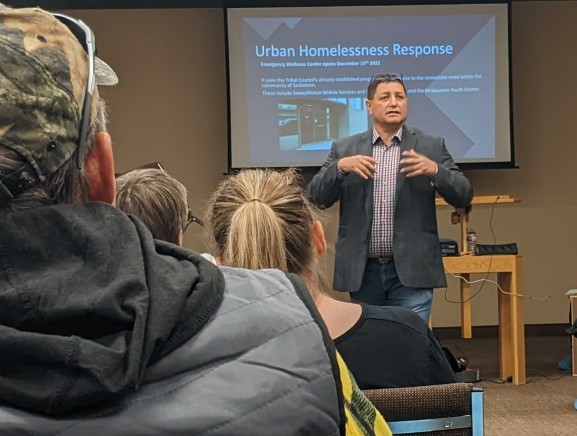 The Saskatoon Tribal Council will be opening their new permanent wellness centre in Saskatoon’s Fairhaven neighborhood in the coming week to help house some of the city’s homeless population.

For the past year, the tribal council has run a temporary wellness centre in the city’s downtown.

In October, the STC made the announcement of the acquisition of a former church to be used as the organization’s permanent wellness centre moving forward.

While the temporary shelter will continue its operation during the winter, the new centre will house and feed over 100 people experiencing homelessness on a permanent basis moving forward.

Tribal Chief Mark Arcand and STC staff are holding open houses of the new facility this week for people from the community to visit and find out how the centre operates.

Hundreds of people showed up to the first open house on Wednesday afternoon and Tribal Chief Arcand spent several hours speaking to everyone in attendance while fielding questions and concerns from members of the public.

“It’s not just a neighborhood issue it’s a community issue,” said Arcand to the packed room. “I’m here to help people and I will continue to help people because it is the right thing to do. We can agree to disagree, but we have to think about helping people first.”

Arcand asked the room how many people supported what the STC is doing and the majority rose their hands. However, there were a few dissenters and Arcand gave them open space to voice their concerns.

When asked why the STC chose the Fairhaven neighbourhood when the area already has a high crime rate Arcand pointed to the need for these types of facilities in all areas of Saskatoon.

“I’ve said it publicly before and I will say it again – we need a wellness centre in every ward of the city,” said Arcand to applause from the audience.

The topic of the city’s drugs and addictions problem then became centre of attention.  Arcand recognized it as a major issue and says he believes there needs to be more drug rehabilitation facilities in the province.

He says while the wellness centre is there to help people who need food and shelter STC staff try and help people facing addictions as much as they are able.

At one point, Chief Arcand was speaking about the number of Indigenous clients who use the centre and was asked why “you people” don’t build a centre in your own community.

“It’s not ‘you people,’ it’s all of us as a community,” replied Arcand in a passionate statement about Canada’s history of colonialism and residential schools, which have negatively affected Indigenous people.

The person then apologized for their question.

Voices of support speak out

There were also people who spoke out in support of the STC wellness centres.

One of them was “Don” who came to live in the temporary shelter this past year after his wife died and he had nowhere to go.

“When I went to the shelter the first time I was scared,” he told the room.

Don says wellness centre staff helped him get back on his feet and find a place of his own.

“I got my dignity back and it means an awful lot,” he said.

Another person to speak was a mother who spoke about her son who died of addictions.

“If we had a facility like this back then, my son would probably be here today,” she said. “I live one block away from this facility and I have no fear whatsoever.”

The Tribal council will be holding three more open houses over the next couple days. One more on Wednesday evening and two on Thursday.

The wellness centre will soon begin accepting their first cleints, which the STC refer to as “relatives.”