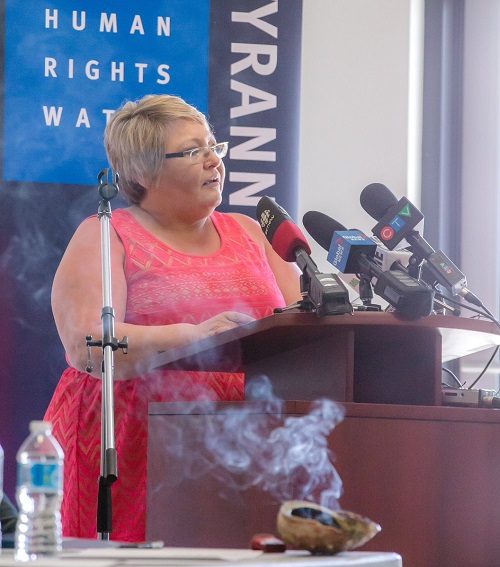 Indigenous leaders in Saskatchewan are taking issue with the federal government’s approach to decreasing gun violence in the county.

Yet as part of the amendments, Ottawa is proposing “Yellow Flag” laws, which could temporarily restrict a person’s ability to access a firearm, if they are suspected of being a danger.

“The legislation provides that anyone can contact the Chief Firearms Officer to report someone under the Yellow Flag regime. It could lead to the potential abuse of this section by having someone complain to a CFO with little information, thereby triggering an investigation,” Vice Chief Heather Bear said. “Everyone in Saskatchewan knows that tensions are high between private land users and Treaty sustenance hunters. It is therefore concerning that some private landowner users could report anyone they see out hunting, which many do already. And the sustenance hunters could have this license revoked, and his guns may be confiscated.”

If a person gets a yellow flag designation, the Chief Firearms Officer can confiscate firearms and revoke that person’s ability to access firearms and ammunition for up to 30 days as it investigates the complaint. Any member of the public can make a complaint to the CFO for investigation.

“When guns are confiscated from sustenance hunters, it impacts them and their families when they are merely trying to put food on the table. When guns are confiscated, it may impact the whole nation, especially for those who hunt for ceremonial purposes. Sometimes we need only traditional food for ceremonies,” Bear said. “If there are no safety issues, and there is no issue of domestic violence or any kind of violence, then taking away one’s gun impacts our nation’s ability to assert our inherent Treaty and Constitutional Rights. We also view our guns as a tool with our First Nation sustenance hunters.”

Bear notes that many Indigenous hunters do not require a Possession and Acquisition License when harvesting, as Treaty’s have not required such documentation. The FSIN is proposing amendments to legislation to recognize Indigenous inherent rights to hunting and to reinforce that a PAL is not required for Aboriginal hunters.