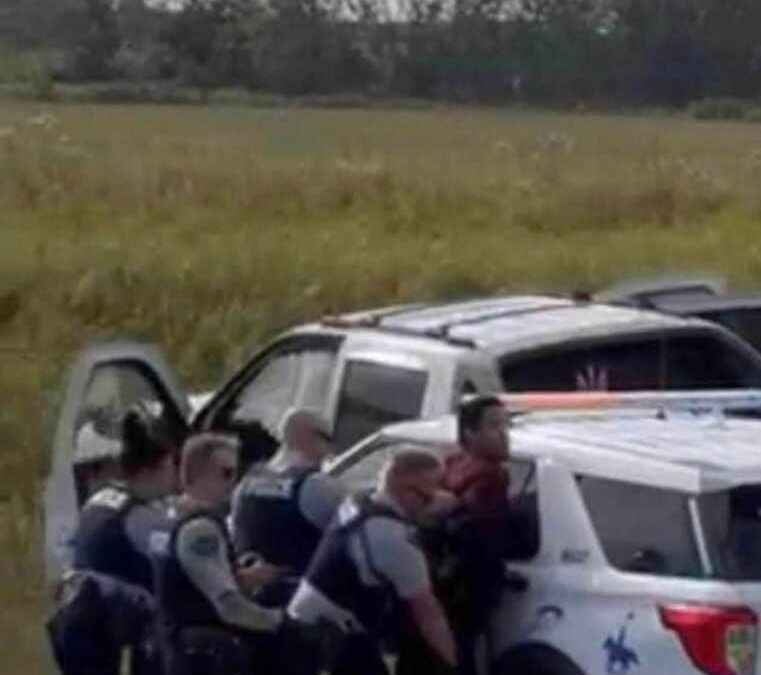 (A photo shared on Facebook of what appears to the arrest of Myles Sanderson Wednesday. Credit Luke Lawrence Facebook.)

“This evening, our province is breathing a collective sigh of relief, as Myles Sanderson is no longer at large. I can confirm that he is no longer a threat, and there is no risk to the public,” said Saskatchewan Assistant Commissioner Rhonda Blackmore.

RCMP confirm that Myles Sanderson died, after being arrested Wednesday. “Shortly after his arrest, he went into medical distress. Nearby EMS were called by police to attend the scene and he was transported to hospital in Saskatoon. He was pronounced deceased at the hospital,” Blackmore said.

Mounties would receive a report that Sanderson was standing outside a Wakaw home brandishing a knife and breaking into a white Chevrolet Avalanche. Blackmore explained that Sanderson was observed by an RCMP officer traveling west toward Rosthern in excess of 150KM/H. At approximately 3:30 P.M. he was seen traveling along Highway 11 south of Rosthern, where authorities guided his vehicle into a ditch and arrested him. He would die a short time later.

Blackmore confirmed that Sanderson was the only occupant of the truck, but did not specify a cause of death. She noted that officers performed live-saving measures until EMS took over.

“Now that Myles is deceased, we may never have an understanding of that motivation. His motivation may at this time and forever only be known to Myles,” explained Blackmore.

Mark Arcand, who Wednesday told the public that his sister Bonnie Burns and nephew Gregory Burns were among the 10 fatalities, expressed relief upon the announcement that Myles Sanderson had been arrested.

“We are relieved that Sanderson has been arrested and the manhunt is over. Now people can start to feel safe again but also now is the time for healing to begin,” Arcand said. “There is a lot of trauma that will need to be dealt with and the victims will need our continued support. This is just the start.”

Saskatoon Police Services will conduct an independent external investigation of the incident. RCMP has requested the Ministry of Justice appoint an independent investigation observer. Investigators continue to process the 13 crime scenes, vehicles associated with the crime and new scenes from today. Autopsy results and witness statements will not be released, as that forms part of the investigation.

Blackmore was on the James Smith Cree Nation Wednesday prior to Myles Sanderson’s arrest, speaking to residents who expressed fear that he had not been apprehended. “People were saying I haven’t slept, I can’t sleep. I can’t close my eyes. Every time I close my eyes, I hear a noise, and is that him coming back? So, I hope that this brings them some sense of closure in that they can rest easy tonight, knowing that Myles Sanderson is no longer a threat to them,” Blackmore explained.

The leadership of the James Smith Cree Nation will hold a press conference tomorrow morning.