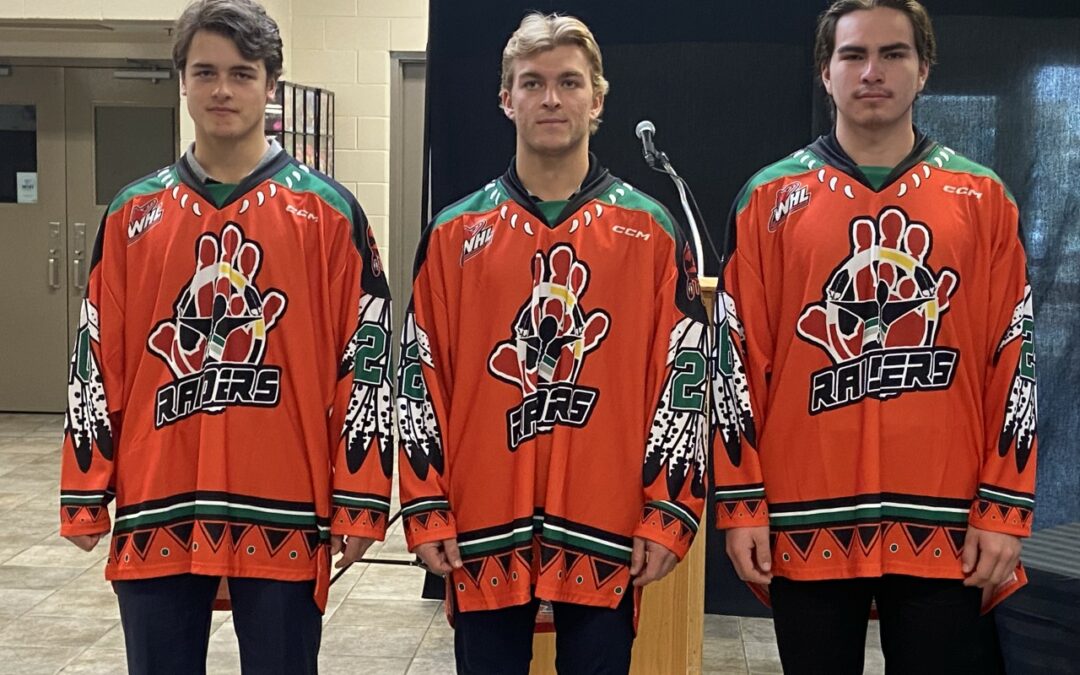 The Prince Albert Raiders have unveiled a special jersey.

Thursday morning in the Johnny Bower Lobby at the Art Hauser Centre the team debuted the orange jerseys they will be wearing on October 1 when they host the Edmonton Oil Kings. The uniforms are part of the team’s recognition of Orange Shirt Day on September 30.

We unveiled jerseys that will be worn on October 1st against the Edmonton Oil Kings in honour of National Day of Truth and Reconciliation.https://t.co/BqAeyHT9Fs pic.twitter.com/eRgQKR1r8h

Mark Ripley, dealer principal at Mann-Northway GM, which sponsored the jerseys explained they were approached by the team about being involved in designing and creating the jersey. Ripley said they also wanted to be involved to stand in support with local Indigenous communities given the recent violence at James Smith Cree Nation. He added Mann-Northway assembled a team to make the jersey a reality.

“We had designers, we had tattoo artists, graphic designers and we had just local people from different reserves to make sure that they all had input into the jersey,” he said. 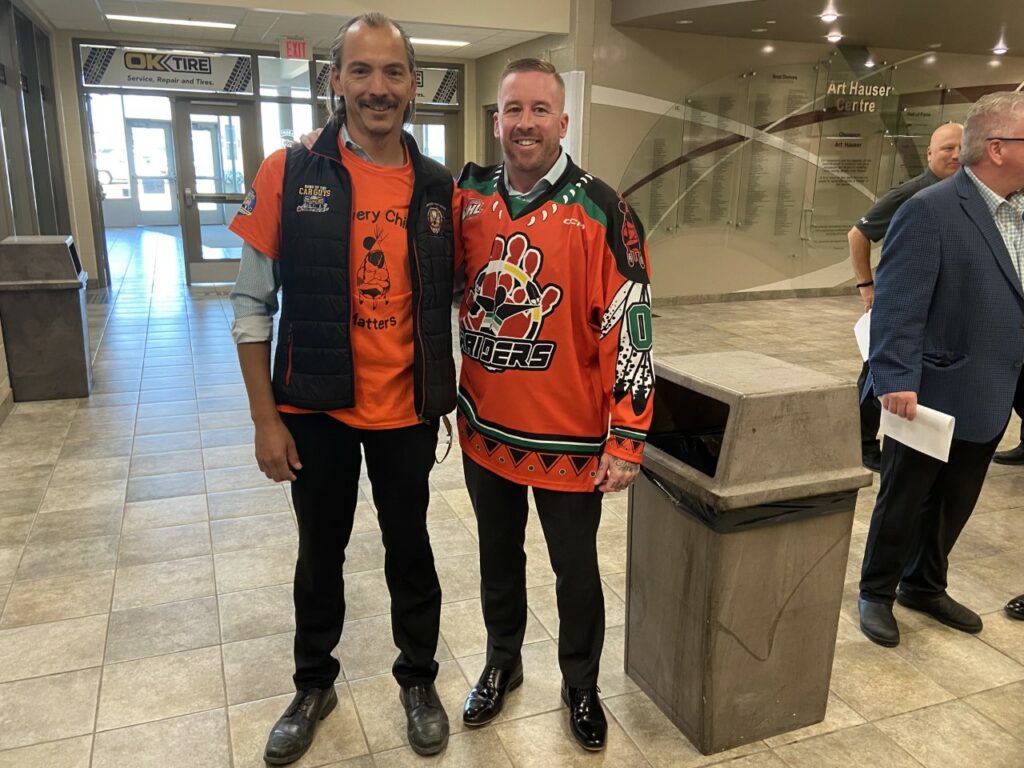 A number of dignitaries from the City of P.A. came out to see the uniform unveiled, including mayor Greg Dionne, Prince Albert Police Service (PAPS) Chief Jonathan Bergen and Deputy Fire Chief Alex Paul. Also in attendance was Richard Ahenakew, general manager of the Northern Lights Casino. Before the unveiling, elder Wayne Ahenakew said a prayer, there was as well a moment of silence to honour those lost to the violence at James Smith Cree Nation.

Anthony Musaskapoe, one of the artists who helped design the shirt said it was quite a feeling to see it make its public debut.

“Pretty crazy, because it just started out as simple sketch when they asked me to come up with ideas and now its this,” he said.

The designers worked to ensure the images displayed on the jersey reflected a range of Indigenous cultures. On the collar of the sweater is a bear claw necklace design, the player name plate on the back is a Métis sash and eagle feathers are also present on the shoulders. Musaskapoe said it felt pretty good when he was asked to help with the design process.

“It felt pretty amazing, the fact that I’ve been doing this my entire life and this opportunity, coming to me was a good example of my hard work paying off,” he said. 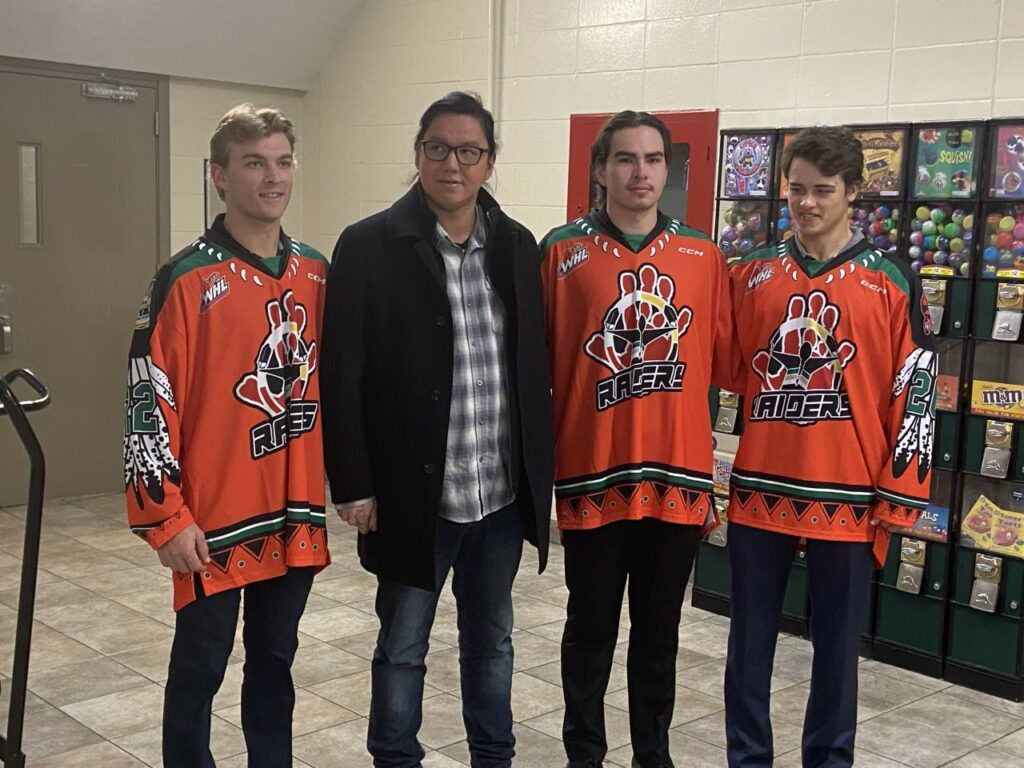 The Raiders had three players on hand to model the sweaters for media, one being forward Dallyn Peekeekoot a member of Ahtahkakoop Cree Nation. The forward who is entering his third season with the team had high praise for the artists who designed the jersey.

“I think the artists did an awesome job and its so nice to wear it and represent a big matter in today’s society,” he said.

One of the designs which especially stood out for Peekeekoot was the main logo right on the front of the shirt.

“The logo does, because it has the medicine wheel and there’s a person on there and I think they have the braid which represents lots of our native culture,” he said.

Raiders business manger Michael Scissons said the team has been looking to do something to mark Orange Shirt Day for awhile. He explained the planning to get to the unveiling Thursday started about six months ago. Scissons said as a community owned team it is vital for them to work to connect with everyone.

“It’s really important for our players and our organization to understand where we play and the people we play in front of and the people that supports us, its an incredible honour just to be able to do this for the community,” he said.

The Raiders will only be wearing the uniforms for their game October 1 against the Oil Kings. After the game they will be auctioned off with the proceeds going to support Indigenous sports and programming in the city.