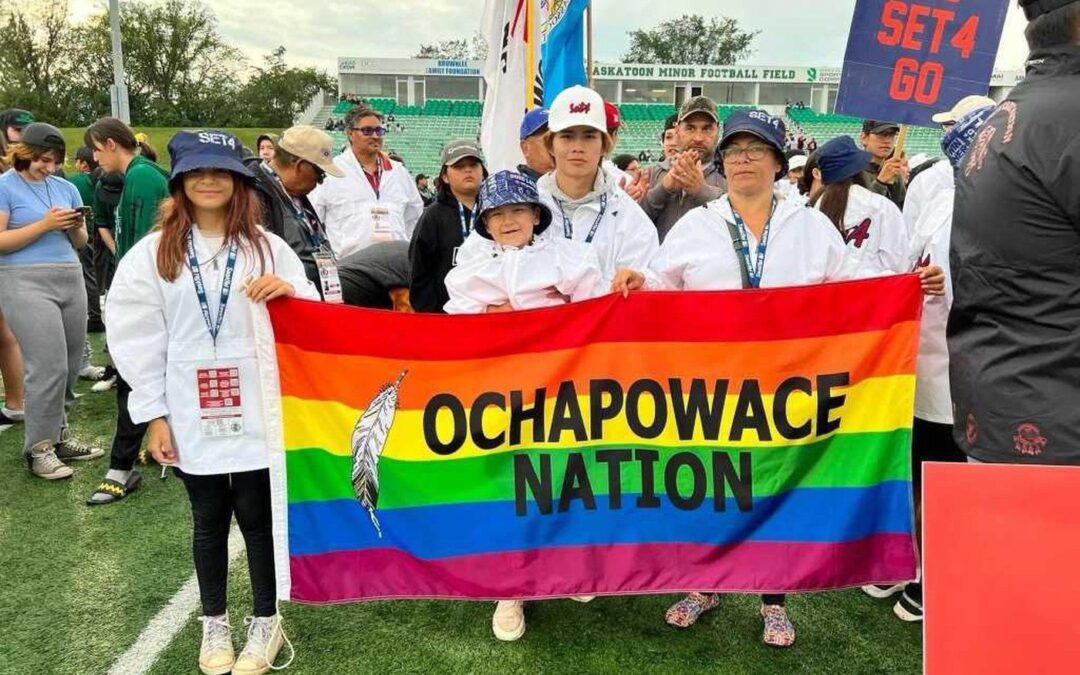 Pride Month was an exciting, vibrant time in Saskatchewan, with flag raisings, parades and rainbow-spangled events taking place almost every day in June.

But during the other 11 months of the year, often with little fanfare, people throughout the province are working hard to keep that momentum going.

“Pride is fun, and it’s loud, and it’s pretty — it’s all of those things — but we are still the exact same people outside of June,” said OUTSaskatoon executive director Krystal Niecker. “And we want to be able to have that freedom and to be celebrated all year round. …

Over the last few years, Niecker said there has been a “good grassroots vibe” of LGBTQ2S+ support in Saskatchewan’s small communities, with local queer groups “popping up all over” and persisting beyond Pride Month.

In Buffalo Narrows, a youth organization is already preparing for next summer’s Pride celebrations — all while building a space for local LGBTQ2S+ kids to find friendship and support all year round.

Owen Chester, founder of the Young North Project, started a 2SLGBTQ+ and allies club this year.

“I figured, because there is nothing Pride in Buffalo Narrows, I needed to step up,” said Chester. “The LGBTQ community in Buffalo Narrows is a little bit hidden and a lot of people have left the town. I felt it wasn’t very welcoming.

“After starting this Pride club … it’s starting to feel a lot more comfortable.

“And I think, when the club starts to grow more, everyone is going to feel more comfortable within the community to be who they are.”

Already, Chester said club members have “a lot of projects brewing,” and are getting excited about the bright future of the LGBTQ2S+ community in Buffalo Narrows.

In the Battlefords, too, educators are hoping to offer queer youth a lasting message of positivity, support and empowerment.

This summer, the Battlefords Family Health Centre has been inviting local teens to attend lunch-and-learns about sexual health.

Maunula said the sessions have been popular — everyone enjoys the games and prizes, and some teens have been coming every single week.

And building those relationships — letting kids know there are safe, supportive adults around who they can come to with questions or to get connected to other resources — is important for the well-being of all local youth, and LGBTQ2S+ youth in particular.

“It’s really important for youth to be able to have a safe place where they can go and talk and meet people who accept them and are willing to listen to them,” said Maunula. “And that’s what we strive to do.

“So we’ll keep being involved with the GSA groups that are running through the high schools, being advocates and allies for these youth that are trying to find a safe place to be themselves.”

‘There forever, I hope’

Pride month celebrations, like hosting a parade or raising a rainbow flag, can also be sparks that ignite more lasting change.

Tyler George, a member of Ochapowace First Nation, was deeply moved to see a Pride flag raised on his home reserve for the first time this June.

As someone who has been a very visible, “out” queer person since he was very young, he knew that more support was needed.

“I was getting messages and people coming up to me from my nation — kids as young as nine asking me how I was able to be myself, older kids asking me how I came out to my parents,” George said. “I even had 40- and 50-year-old people texting me and Facebooking me and saying that they wish they could have come out, but they feel like their time has passed.

“And that made me feel sad, because I didn’t know why other people couldn’t feel that same belonging that I felt. And then I thought, well, maybe it’s because we didn’t actually have visible support. We’ve never advertised that we are a welcoming community.”

But visibility is only the beginning.

At the Pride flag raising ceremony, George brought the new, gender-neutral signage for the school’s bathrooms.

Ochapowace is also updating their policies with gender-inclusive language, and has made it clear that children on the First Nation can play on the sports teams that best align with their gender identity.

So, when George looks up at the Pride flag, it’s not just about a temporary celebration — it’s a symbol of an ongoing, living commitment to the LGBTQ2S+ members of Ochapowace First Nation.

“The Pride flag is flying right in front of our school, and it’ll be there as long as possible,” he said. “It’s going to be there forever, I hope.”

(Jaylie Yuzicapi, Beau Bear, Trey Bear and Crystal Bear carry the Ochapowace First Nation Pride Flag at the 2022 Tony Cote Summer Games. As part of an ongoing commitment to LGBTQ2S+ inclusion, the First Nation is encouraging children to join the sports teams that best align with their gender identity. Submitted by Tyler George)