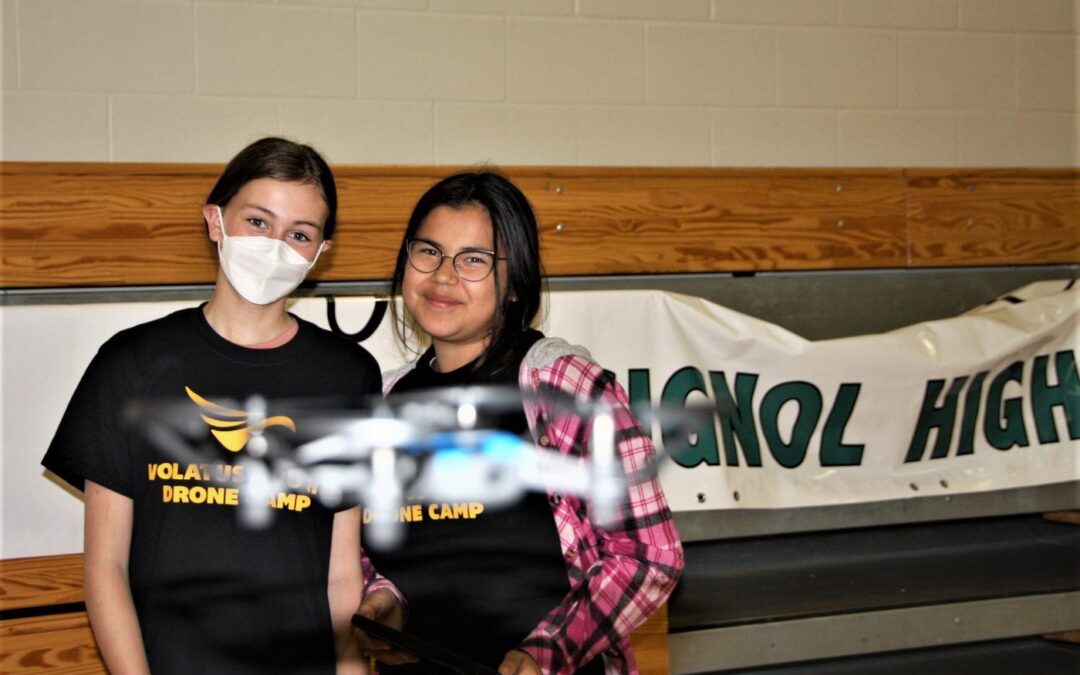 The high school, which serves 157 students, boasts an award-winning robotics team, thriving greenhouses growing crops year-round, a wilderness learning site and a school building where every classroom looks out over Lac Île-à-la-Crosse.

This year, students and staff are exploring a new perspective on their community by learning to fly drones — gathering images and data to better understand the land around them.

On Saturday morning, students eagerly took to the air, piloting small drones around obstacle courses in the school gym.

Eighth-grader Kaden Laliberte said he was having a “very fun” time practising his skills, but couldn’t wait to take the drone outside and really see what it could do.

“I want to try to drive the drone as high as it can go, and see if I can see anything in the bushes, like animals,” he said.

Seventh-grader Martha McGonigle said she looks forward to learning more about 3D mapping — building models of buildings, parks, or even a whole community from aerial views — and was also “especially excited for drone racing.”

That would let him fly bigger drones in uncontrolled airspace.

Ted Flett, who leads the school’s land-based learning programs, said he was particularly excited to bring drones into his outdoor teaching.

“I wanted to be able to engage kids with this stuff and use it out in the bush, too,” said Flett. “I like to find ancient trails that our people around here used before roads — that’s nice. I can sometimes find them on Google Earth, but you can just barely see them. I’d like to get right down into there and start mapping the sensitive areas.”

Flett said the bird’s-eye views that drones offer can also help students understand “how the animals and trees interact, and how they need each other.”

Students could look at how waterways are changing due to climate change, see the impact of local industries on the landscape and track vulnerable animal populations. This could be especially important for studying and protecting the local caribou herds, which Flett said have been in decline for years.

“We rely on these animals,” he said. “A lot of folks still live off the land, and it’s a big part of our culture and our history. So it’s really important that we look after the animals and the environment.

“I mean, that’s our whole identity as people here in Île-à-la-Crosse and the surrounding areas.”

Over the weekend, Volatus Aerospace vice-president of education and agricultural programming Matthew Johnson was in Île-à-la-Crosse to lead the drone camp for students.

He said drones can help teach almost any subject — from mapping the school and calculating the building’s volume in math class, to trying out new photography angles in art, to taking on debates about the legal and ethical uses of drones in English.

“Working with the students is amazing,” he said. “It’s very fun to see how they engage with the technology. And they learn piloting skills, communication, safety, regulations, photography and videography.”

In other parts of North America, Volatus Aerospace has used drones to identify diseased trees in local parks and find the best routes to pick up litter along waterways.

While she watched students practise with their drones on Saturday morning, she and Johnson were already talking about having the young pilots fly over the school’s bank of solar panels to check for cracks or damage.

She said this is a chance for the school division to embrace traditional knowledge and new technology at the same time.

“These aren’t things that oppose each other,” she said. “It’s a matter of meshing them and finding opportunities to bring them together.

“If we look at the world in different ways, I think you create a perspective of wonder, respect and value.

“I’m not saying we can recreate what was, but we have the opportunity to envision something that we never thought about before.”