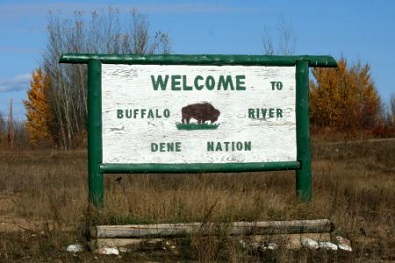 The Buffalo River Dene Nation is calling for help to deal with a serious situation in the community.

The First Nation located in northwest Saskatchewan is declaring a state of emergency due to drugs, crime and gang activity. Chief Norma Catarat explained the community has been seeing some serious incidents lately.

The motion to declare a state of emergency was passed by Chief and Council with all Councillors agreeing to adopt the motion. The state of emergency is set to be in effect for an indefinite period of time. Catarat said the recent incidents of violence are having a real impact on people living on the First Nation, especially the nation’s elders.

“Our elders are scared to even sleep, our elders tires have been slashed,” she said.

The Buffalo River Dene Nation Chief said the First Nation is in need of outside help to deal with the current situation. Catarat said they are calling for the RCMP to be provided funding so they can conduct proactive enforcement. Catarat added there have been cases where gang members have been arrested and then released soon after back into the community, which is causing problems.

“We need to have some policies and procedures, or things looked at so this doesn’t happen to anyone else,” she said.

The First Nation is getting support from the Federation of Sovereign Indigenous Nations (FSIN) in their calls for assistance. In a media release FSIN Chief Bobby Cameron called on the province to provide support through the RCMP to help the community. He added there are limits to what Chief and Council can do on their own.

“We call on the province of Saskatchewan’s Ministry of Corrections, Policing and Public Safety to provide immediate relied through additional funding for the RCMP to conduct proactive enforcement immediately. Our communities are in crisis and they will not go through this alone,” he said.