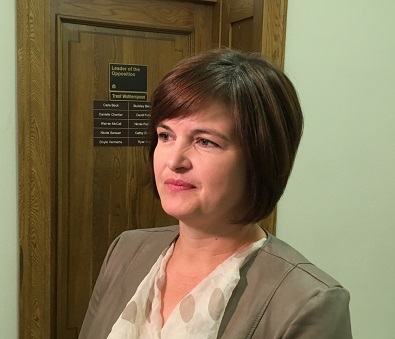 The new leader of the Saskatchewan NDP party says she is ready to show northern voters they can be confident in her party.

Carla Beck won the opposition party’s leadership this past weekend becoming the first female to ever lead the party. While Beck is excited about the new position, telling MBC Radio News she has listened to her name being announced as leader multiple times, she understands she has a difficult job in front of her.

Tumultuous 15 years for the NDP

The last decade and a half have been a tumultuous time for the Saskatchewan NDP last forming government under Lorne Calvert in the 2003 election. Calvert would lose to Brad Wall and the SaskParty in 2007 who have formed government in every election since.

Since Calvert’s time as premier, the Saskatchewan NDP have had three different leaders, Beck being the fourth.

The most recent blow coming to the NDP was a historic defeat in this past year’s Athabasca by-election dropping the seat to the SaskParty’s Jim Lemaigre – the first time that party has held a seat in the constituency in its history. Also the first time the Sask. NDP has not held the seat since the late 90s.

Beck now says her first plans as leader will be to get out and connect with people in the province.

An area of concern Beck brought forward was growing the economy to ensure young people will stay here and others who left will come back home.

When asked about the recent NDP loss in Athabasca and how the party can rebuild their voter base in the northwest Beck says the work “starts right now” pointing to the low voter turnout in the recent by-election as a reason to get out and visit communities in the constituency.

“We have to give people a reason to hope again and that the NDP is ready to put in the work…to build the solutions that it is going to take to ensure we have the people’s trust that we are serious and we will be a viable and exciting alternative to the SaskParty in 2024.”

When asked what tangible things northern voters could see under the NDP, Beck says she has heard the concerns of many voters. She cited the suicide and addictions crisis, education opportunities, funding for social services, and to make sure federal funding is not left on the table as areas she feels are the most important.

Beck owned the voter apathy in the north can be partly to blame on the NDP themselves.

“I think that is on us and I do feel a great deal of responsibility to do the work and the outreach to give people hope again,” said Beck. “We are going to do what it takes to win the next election and when we do we will deliver that change that so many people are looking for across this province.”