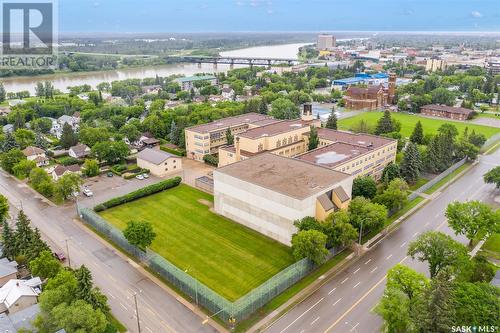 Education Director Lorel Trumier said in an interview she hadn’t heard whether city council had approved the sale, but looked forward to seeing what the MN-S would do with the property.

“I am anxious to see what the city has decided and I can’t see them putting any barriers to it,” Trumier said.

“As a school division, we would want to congratulate the Métis Nation for acquiring the facility and we look forward to the promise of future partnerships and opportunities to work with them.”

Trumier said the City of Prince Albert notified the board about the possible sale in a letter dated for Apr. 12, but the letter was not received until Apr. 19. That gave the board little chance to offer feedback, since the submission deadline was also on Apr. 19, and the next board meeting wasn’t until Apr. 25.

However, Trumier said they read the proposal and thought it was a great opportunity for the MN-S. They were also pleased with the potential opportunities the deal would bring.

The Métis Nation-Saskatchewan sought to purchase the building from the Sisters of the Presentation of Mary for use as a private school, public assembly, catering service, child care centre, health clinic and office.

The building was home to the Blessed Marie Rivier Catholic School which was closed in 2017 due to low enrollment, with students moved to École St. Mary High School.

In 2018 Saint Joseph Developments outlined plans for a development at the complex, which never happened.

In 2019 the Ministry of Education announced the possibility of using it for Conseil des Écoles Fransaskoises (CÉF) students. The Société Canadienne-Française de Prince Albert (French-Canadian Society of Prince Albert, or SCFPA) was concerned in 2021 as the plan had not moved forward. In 2020 the province announced that it had commissioned a third-party business plan for the concept.

The Fransaskois community of Prince Albert and its partners, including seniors groups, École Valois Parents Council and staff, Métis community members and francophone school board representatives, worked on a business case pertaining to the purchase of the former Rivier Academy as requested by the Minister of Education.

The city’s French community has outgrown École Valois and former community centre. It’s inadequate to meet the expectations and needs of parents, students and other French-speaking citizens, including newcomers, with respect to the educational, sporting, economic and cultural potential of the community, a release stated.

The building was listed for sale by the Sisters.