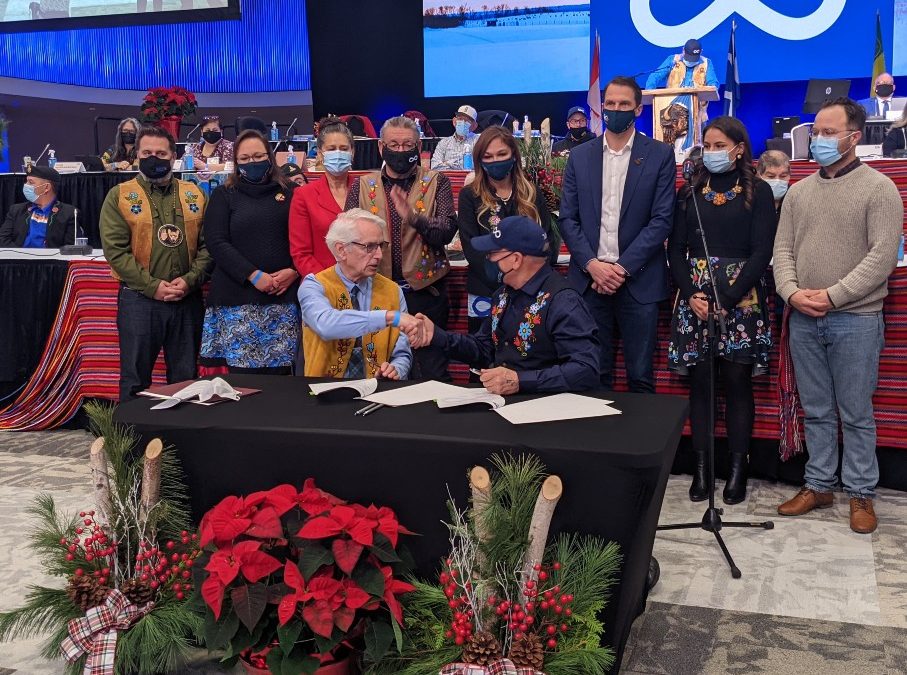 The Métis Nation-Saskatchewan and the University of Saskatchewan have signed a historic agreement on Métis citizenship and identity.

The agreement between the MN-S and the university was signed at the Métis Nation’s legislative assembly in Saskatoon on Saturday and will ensure the university will rely on the MN-S Citizenship Registry to assess eligibility for Métis based opportunities at the post-secondary institution.

This is the first kind of agreement of this nature between a Canadian university and a Métis government.

“This is an important moment for the Métis of Saskatchewan,” said MN-S President Glen McCallum. “This agreement recognizes that only the Métis government of Saskatchewan and its citizens can define who we are through our laws and ways. This lets us work together with the university in a good way.”

In recent years, the MN-S has made a push to increase registrations under the MN-S Citizen Registry to increase the number of Métis citizens in the province.

“The registry is so important,” Glen McCallum told MBC News at the MN-S assembly in Saskatoon.  “(This) is a historic time with the Métis Nation and the University of Saskatchewan to be able to sit at the same table and sign a document that really specifically addresses the issues of citizenship.”

Along with the push for an increase in registrations, the MN-S has also been calling on post-secondary institutions, businesses, and governments to use the MN-S registry when determining Métis ancestry.  The agreement with the university is the first agreement of the kind to be signed.

Self-identification is “insufficient,” says U of S President.

The president of the U of S believes this agreement is consistent with the university’s commitments to reconciliation and indigenization.

“We believe that a key part of reconciliation is recognizing that Indigenous communities define and verify their own membership,” said USask President Peter Stoicheff. “The university, in signing this document, continues to build on its strong relationship with MN–S by affirming that Métis identity is determined by the MN-S. We are extremely appreciative of the MN–S’s shared commitment to advancing this important work.”

In a conversation with MBC news Stoicheff says the agreement is based on the understanding that self-identification is “insufficient today” to determine and validate the identity of Métis citizens of Saskatchewan.

“The university cannot play the role of accepting self-identification but instead honours the exclusive ability of the MN-S to be the government to validate citizenship,” said Stoicheff.

The agreement between the university and the MN-S comes weeks after U of S researcher Carrie Bourassa was put on leave from the university after her claims to Métis heritage came under fire.

“The Métis Nation–Saskatchewan citizenship registry is a uniquely proven, effective, and secure method of assessing who is Métis in Saskatchewan,” said President McCallum. “The University of Saskatchewan’s understanding of this shows the hard work we have done together, and we expect others will follow this lead. The Métis Nation–Saskatchewan as a government represents the Métis Community in Saskatchewan. It is up to us as the Métis community to recognize our own people and we have both the authority to and means to do so.”

“What this represents, and it has all been led by president McCallum and we have been the beneficiaries of it, is the first steps of a larger national conversation,” said Stoicheff.

The university president also added the agreement helps bring “clarity” to the U of S.

“It brings clarity to an issue that has lacked clarity and has been open to enormous interpretation that I think has been challenging and problematic for Métis people at the University of Saskatchewan,” said Stoicheff.  “The way it brings clarity is that it gives the authority to validate and determine Métis identity to the Métis-Nation Saskatchewan.”

When asked about the possible exclusion of Métis people in Saskatchewan who are not registered under the MN-S Glen McCallum says they have the opportunity to get registered.

“All we have to do as a government is put the system in place…and it’s available to them.  If they don’t want to then that’s their business, not mine and I can’t force people to sign up,” McCallum told MBC News.

Historic agreement signed at the MNLA underway in Saskatoon

The U of S and MN-S held the signing ceremony during the Métis Nation-Saskatchewan’s legislative assembly underway in Saskatoon on Saturday.

The assembly saw the historic signing, the swearing-in of the new youth president of the Provincial Métis Youth Council Autumn LaRose-Smith, and president McCallum’s State of the Nation address.

During his address, McCallum spoke on many things and tried to drive home the importance of strong Métis governance in the country.

“When we win as Métis, Saskatchewan wins, Canada wins, everyone wins,” he told the assembly.

The assembly will also see the unveiling of the winners of the This is Your Shot vaccine contest and is scheduled to wrap up on Sunday.