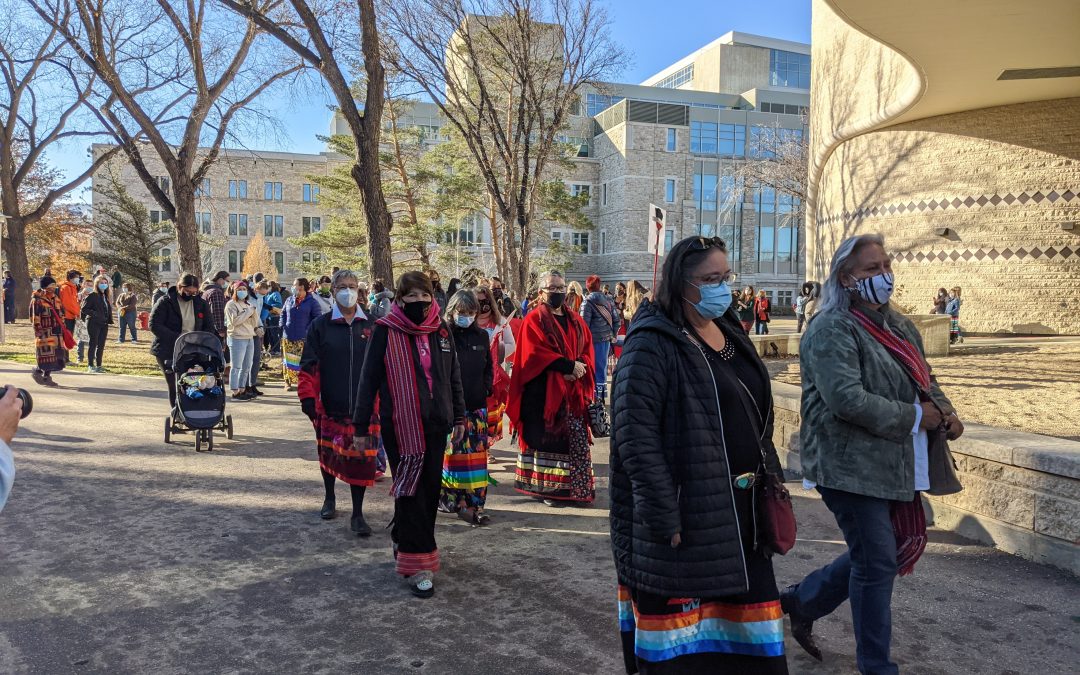 A group of Indigenous matriarchs is calling for post-secondary institutions and other organizations to stop allowing non-Indigenous people to self identify as Indigenous.

A demonstration took place at the University of Saskatchewan Friday afternoon with a group of Indigenous matriarchs calling for change.

The Indigenous women organizing the event were a part of the group called The Matriarchs, Clan Mothers, Aunties, and Allies.

The demonstration comes in the wake of the Carrie Bourassa situation; a U of S researcher who was recently put on leave after her Indigenous identity was called into question. Bourassa was a top researcher at the university and also held a high position with the Canadian Institute of Health Research who relieved Bourassa of her duties as well.

For Marilyn Poitras, one of the Indigenous matriarchs speaking at the event, the response to this story is one of reclamation.

“Reconciliation is actually reclamation for Indigenous people and now we are here to reclaim our identities,” Poitras told the hundreds of people in attendance at the demonstration.

Raven Sinclair, a professor of social work at the University of Regina, has been outspoken during the entire Carrie Bourassa situation. Sinclair a Cree, Assiniboine and Saulteaux woman from the George Gordon First Nation, says this isn’t a witch hunt.

“We have known about this for a very long time and we always thought the truth would come out, we just had to give it a push,” said Sinclair. “When people use our identity to further their careers it is an act of colonialism…It’s theft. You don’t have a right to speak on our experience based on fabrication.”

During her address at the demonstration, Sinclair brought up UNDRIP and the Daniels decision and how they speak on self-identification. She says any interpretation of those documents that would support self-identification alone is a “manipulation.”

“You actually have to be Indigenous to identify as Indigenous,” she said. 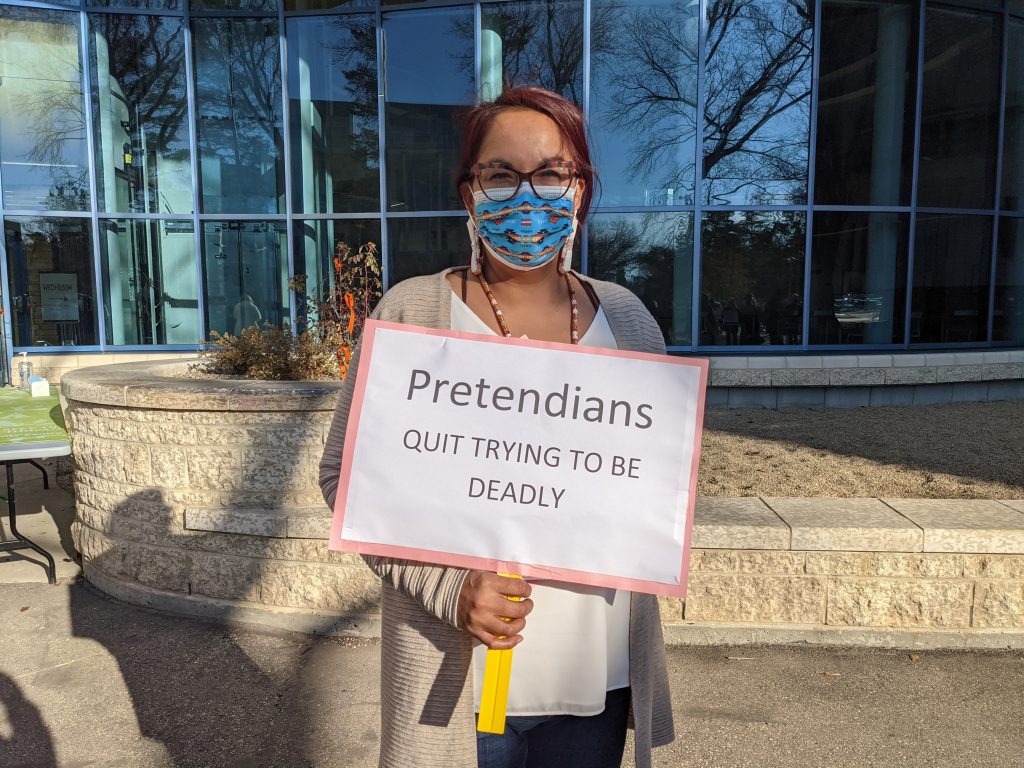 (PHOTO: Jenny Gardipy, a PHD student at the U of S holds her sign at Friday’s demonstration.  She told MBC News it was an important event for her to be a part of.  Photo by Joel Willick.)

Friday’s demonstration began with speeches in front of the Gordon Oakes Red Bear Indigenous Students Centre before attendees were led on a walk by the Indigenous matriarchs around the university campus.

Several of the participants brought signs with them. “They want the platform without the trauma” read one sign while another said, “Pretendians stop taking up space.”

Winona Wheeler, a Métis Indigenous studies professor at the University of Saskatchewan, says demonstrations like the one on Friday are about change.

“True reconciliation, true Indigenization, and true decolonization mean changing the systems and structures and that’s what we are mandating you to do today,” said Wheeler.

“Putting some parameters around self-identification is the best way to go forward,” said Dyck, a member of the Cree Gordon First Nation. “Things may take some time, but we need to start changing things now”

The Congress of Aboriginal Peoples put out a statement on Monday morning voicing their support for the demonstration.

“CAP is pleased to see the demonstration and that the University of Saskatchewan finally did the right thing by placing Dr. Carrie Bourassa on leave, following her false claims of Indigenous heritage,” said CAP National Vice-Chief Kim Beaudin in the statement. “For years, she claimed to be an Indigenous person, receiving education grants, career advancements, and was the scientific director of the Indigenous health arm of the Canadian Institutes of Health Research (CIHR)—all while lying about her true ancestry.”

In the statement, CAP also joined in on the calls for institutions, governments, and organizations to re-examine their vetting processes when vetting someone’s claims to Indigenous identity.