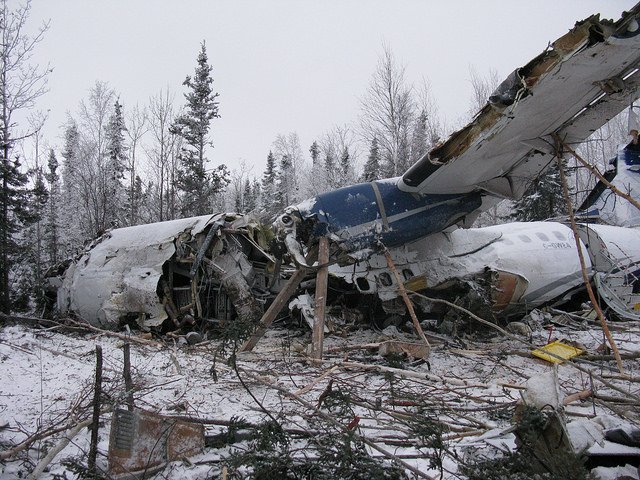 The Transportation Safety Board of Canada (TSB) has named icing as the main factor in the West Wind Aviation crash that went down near Fond du Lac airport.

On Thursday, the TSB released its report from the investigation into the flight that crashed in 2017.

The almost 250-page report outlines occurrences that took place before, during and after the flight, the crew’s history, injuries and damage sustained in the crash, and the TSB’s findings of the cause of the crash.

During a press conference, TSB’s chairperson Kathy Fox told reporters that the main factor of the crash was icing.

“It was quite an extensive and comprehensive look at a lot of factors, but the main factor is the fact that the aircraft took off with ice and contamination on the critical surfaces,” she said.

The report explains there was icing on these critical surfaces, which includes parts of the plane needed to fly such as the wings, when it landed in Fond du Lac even after the pilots had utilized the aircrafts anti-icing and de-icing equipment.

The plane accumulated more icing while on the ground but no de-icing equipment was used.

The report explains the pilot examining the plane before take-off wasn’t able to see the extent of the icing due to Fond du Lac’s apron, or where the planes park, being dimly lit. The report says that both pilots knew about the icing prior to starting the engines.

The West Wind Aviation flight took off on route to Stony Rapids with 22 passengers, two pilots and a flight attendant on board in the evening of Dec. 13, 2017

According to the report, the plane took off without issues, then rolled to the left due to the icing. The plane then collided with trees near Fond du Lac Airport.

Fox told reporters that pilot error was a factor in the crash, but it might not have been only the pilots’ fault.

“It’s not just the final decisions of the crew,” she said. “In this case, obviously, they played a key role, but you have to look back at what procedures did they have to follow, what training did they have, did they have the equipment that permitted them to de-ice the aircraft, and we’ve identified that they didn’t have it in the case of Fond du Lac.”

The report explains that, at the time of the crash, there was insufficient de-icing equipment in Fond du Lac for the ATR 42 aircraft that crashed. TSB said because of this, Westwind had created rules that ATR 42s couldn’t go land in Fond du Lac when there were icing conditions.

Because of the aircrafts build, certain parts of the plane experienced more damage which caused two passengers in the middle-forward left section to have serious life-changing injuries and one passenger, 19-year-old Arson Fern Jr., to later die.

The TSB was asked why it took almost four years to complete this report of a fatal crash.

“You’re looking at an almost 250-page report,” Fox said. “There were a lot of factors that were looked at. In the end, (some factors) didn’t necessarily play a role in the final report, but you have to look at, especially in a major accident like this, all of the potential factors.”

TSB recommended that Transport Canada collaborate with air operators and airports “to identify locations where there is inadequate de-icing and anti-icing equipment and take urgent action to ensure that the proper equipment is available.”

Anti-icing equipment suitable for ATR 42s is now available in Fond du Lac, but the TSB said this recommendation is still being implemented elsewhere.

They also recommended that Transport Canada and air operators take action to reduce the chance of aircraft taking off with contaminated, or iced up, critical surfaces. This too is still being implemented but the TSB said there has been at least one “targeted inspection blitz” of de-icing equipment. They didn’t elaborate on where this “blitz” took place.

In response to the crash, West Wind Aviation has implemented new maintenance procedures, made amendments to its training programs, equipped each of its airports with proper de-icing equipment, including high-power, light-emitting diode flashlights, and has implemented new risk assessment requirements.

West Wind Aviation’s commercial air service was suspended after the crash for a few months. In 2021, West Wind and Transwest Air, another airliner based in Saskatchewan, joined together and now operate under the name Rise Air.

(PHOTO: Photo of the West Wind Aviation plane after it crashed. Photo courtesy of the Transportation Safety Board of Canada.)