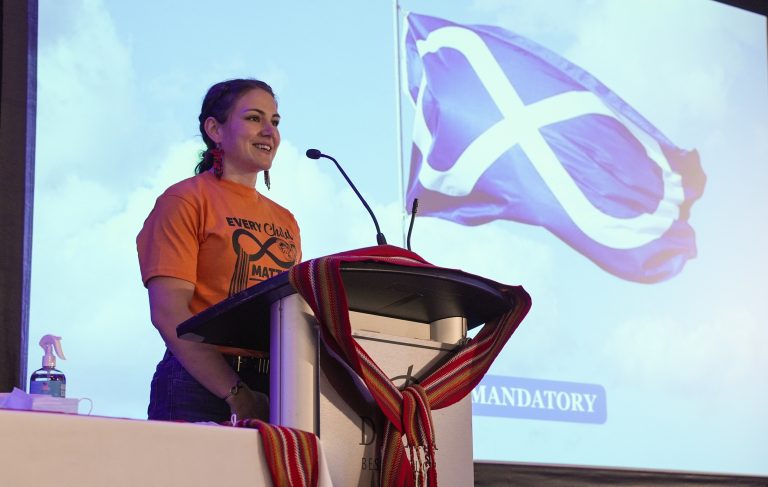 The recently elected president of the Metis National Council says her goal is to bring all Metis Nations together.

Cassidy Caron was the first woman elected to the national Metis leadership position at a General Assembly last month.

Caron came into the position during a rocky time for the MNC as the Manitoba Metis Federation announced their exit from the national group over membership concerns stemming from the Metis Nation Ontario.

The MMF had raised concerns about the Metis Nation Ontario having a high number of non-Metis citizens on their registry. The MMF passed a resolution to withdraw from the MNC after they felt their concerns were not being addressed by the MNC.

While speaking on MBC Radio this week Cassidy Caron says her number one priority is bringing the nation back together.

“We need to move forward together. we are stronger together. and our Metis government is here to advance their priorities,” said Caron.

In light of the recent exit by the MMF, Caron says the MNC is looking to openly speak and discuss the issues raised and hopefully find solutions.

Caron says at the most recent MNC assembly a resolution was passed to develop a panel to “objectively” look into these issues and bring back recommendations to the national council.

“We are really approaching this in a way to look at all the facts, so that panel is going to come together and bring recommendations back to the general assembly… and decisions will be made,” Caron told MBC radio.

“We want to continue to work together on the national level, regardless of the choice of the MMF to withdraw. We are still here and we are working hard on behalf of our Metis citizens.”

Cassidy Caron was the first woman elected as MNC president. While she was raised in British Columbia she has relatives in the Batoche area.

The new MNC president says Saskatchewan will always be a special place for her.

(With files from Charly Durocher)