Let it burn policy does not work for Chiefs 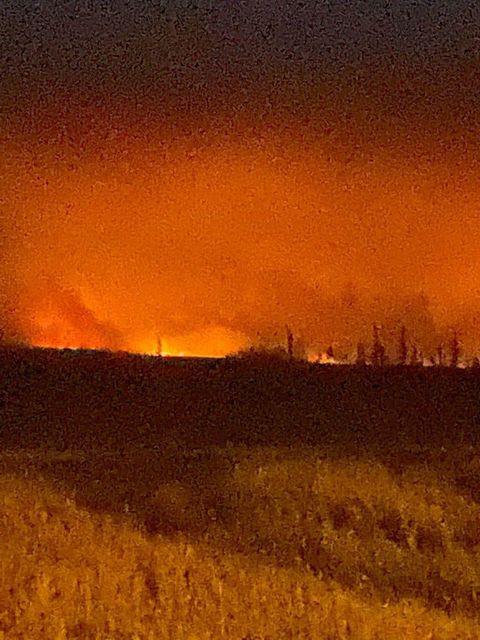 The Chiefs of both Red Earth and Shoal Lake Cree Nations have said the province is not taking enough action on two fires that are filling their communities with smoke and causing evacuations.

Both Marcel Head and Fabian Head said that the government needs to treat the fires near their communities the same as they did the fires near Prince Albert and Smeaton earlier this summer. Both Chiefs flew over the Pasquia Hills and the Crackling Fire on October 4 with the Public Safety Agency.

“There was absolutely no machinery, no crews, no aircraft, no air tankers fighting the blaze. There was something obviously wrong,” said Marcel Head, Chief of the Shoal Lake Cree Nation. “We will find out what the problem is. If the premier is listening, we’re telling the province to get their act together and put some resources and put some manpower and heavy equipment into our area and fight these fires.”

He stated that the province has opted to let some fires burn but the communities most impacted need to be included in the discussions.

The Saskatchewan Public Safety Agency says that is not the case and that the Chiefs may not have seen the work that is being done because of either the smoke or the decision of the pilot not to fly near the head of the fire, where the resources are deployed.

“The Saskatchewan Public Safety Agency (SPSA) is responding to several fires in the area near Hudson Bay, Sask., including Red Earth Cree Nation and Shoal Lake Cree Nation, by recalling and redeploying crews from across the province and attacking the fire with tanker, helicopter and ground crews,” said Christopher Clemett, acting executive director of the Agency, on October 5. “Crews have also been redeployed to address smaller fire starts in the area in order to prevent them from growing into larger fires.”

He also said that some of those crews are from the evacuated area.

“Currently, four Type 2 crews (including three from Red Earth Cree Nation and Shoal Lake Cree Nation) have been deployed on fires in this area. Additional Type 3 firefighters from Shoal Lake have been hired for these fires. Weyerhaeuser forestry staff and equipment have also been assisting with fire response efforts,” stated Clemett.

Both Chiefs, however, say they have had difficulty in communicating with the province and see a difference in the action taken when a community such as Prince Albert has a fire nearby and their communities.

Both Chiefs say they are serious about the threat to their communities and that it needs to be dealt with.

“At what point do you declare a real state of emergency where you have to call upon the Canadian armed forces to come put out these fires,” asked Marcel. “We’re that serious. We can’t rely on the policy that tells us, let it burn. We’re not going to allow that. We’re going to make sure that these fires are attended to properly.”

“If there’s any resources out there that we can utilize, we’ll put out the fire ourselves if it comes to that,” he said.

For its part, the SPSA says it has a protocol on how it responds to fires and starts by evaluating their ability to meet their protection objectives, it identifies values that are at immediate or potential risk, makes sure it is safe to respond and then provides a response that will minimize the impact. It also says it does not have a let it burn policy.

Some members of the Red Earth community have been evacuated since Thursday, Sept 30, including the elderly, those with chronic conditions such as asthma and mothers with young children.

Many of them are in Prince Albert but some are in Nipawin and others in Tisdale.

Fabian Head said that Red Earth evacuated four chartered bus loads numbering over 200 people on Oct. 5 and others left the community by driving.

“We were getting calls throughout the weekend from our members saying they were having difficulties with the smoke,” Fabian said.

Finding hotels for evacuees has been difficult first with COVID and vaccination requirements by some hotels. People want to go home, Marcel said, but band officials are asking them to stay put until the situation is safer.

The bands knew, along with the province, that the Bell fire had been burning near Hudson Bay all summer long but cooler weather in August slowed its growth. That has changed and the weather for the last few weeks has been warm and dry.

Of more immediate concern are the fire in the Pasquia Hills and the Crackling Fire, both of which are nearer to the two communities and the Chiefs say some of the decisions are having a negative impact now.

“Because the fire season was coming to a close, the crews were told to slow down or stop fighting and now we’re in this situation because of those decisions as well, where we’re not included,” Fabian said. “We need to work together with the federal and provincial governments in terms of mitigation and prevention of some of these disasters.”

Marcel said that Shoal Lake has been communicating with the Hudson Bay fire base all summer, trying to assess the situation.

“It’s always the same thing; we have limited resources, limited equipment and limited manpower to fight these fires,” he said of the provincial response.

“We saw the smoke that was coming out of the Pasquia Hills throughout the summer,” said Marcel. “We tried to contact the fire base in Hudson Bay but it’s always the same thing and there was just lip service that they’ve been doing up to this point.”

Both Chiefs point out that the resources were not limited when fires were burning near the edge of Prince Albert in May and north of Smeaton in July and August.

The Bell fire is very large and Fabian is worried that the smoke will linger as the fire will not be able to be extinguished for weeks at the earliest.

Given the poor quality of housing on reserve, the two Chiefs say that the province needs to also consider that more smoke seeps into homes with inferior windows and doors.

Another concern is the proximity of the fires to the two points of egress, Highways 55 and Nine.

“Both sides of the access is going to be cut off pretty soon if nobody tends to those fires on our side of the fire,” said Marcel. “It’s up to the province to see this as a serious matter and we’re waiting for their action.”

(Photo of the Bell Fire. Courtesy of the Prince Albert Grand Council.)