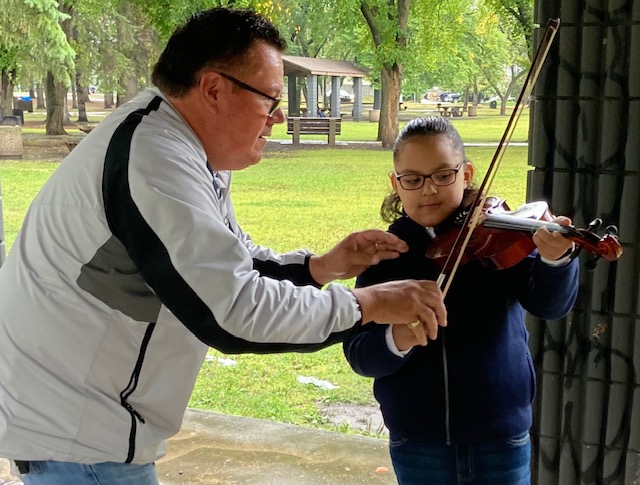 A young Prince Albert fiddler got a big boost to his musical aspirations recently thanks to a $500 donation.

Eight-year-old Sebastian MacGregor is the recipient of the donation courtesy of the Robert Anderson Memorial Fund.

Local musician Donny Parenteau has been teaching MacGregor how to play fiddle for about the past six months.

Parenteau said when Brian Sklar of the memorial fund approached him looking for a student who might be able to benefit from a financial contribution, he couldn’t think of a better recipient.

“So, when Brian came to me and said, ‘Do you have a student who you think is deserving of $500?’ I said absolutely I do and I picked Seby right away.”

He speaks from experience.

“I thought about when I first started. What it was like when I started at 14-years-old and I went with my dad and the fiddle we had was a used one and it was broken. It cost $55 to fix the fiddle. My dad gave me the money and I was the youngest of four kids but I took that and just pursued that dream.”

Sklar, who oversees the Robert Anderson Memorial Fund, is also a well-known Saskatchewan musician who played with Anderson.

He currently hosts a country music show on MBC Radio each week.

Sklar said if given the opportunity, young people will fall in love with fiddle music as he once did.

“Lots of people are interested in fiddle music and, particularly in the First Nations and Métis community, the fiddle is king,” he said. “I can’t say enough about it. I’m really sad that Rob is gone and we miss him everyday because he was a great musician. But his legacy means that we are going to be able to help some of these kids out and that’s important.”

MacGregor’s parents say he plans to put the money towards a new fiddle.