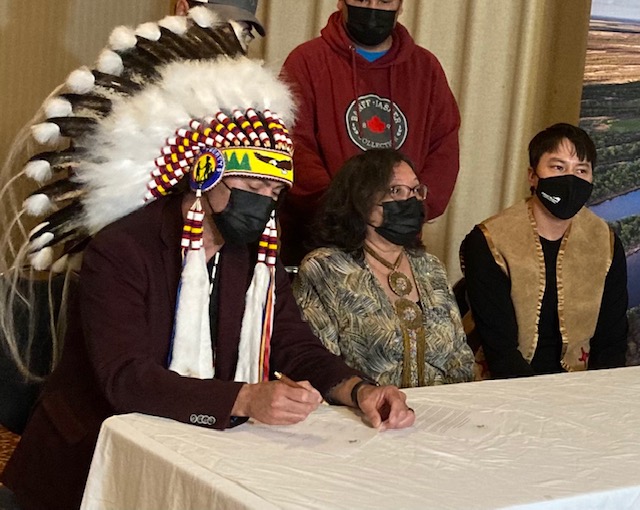 The Cumberland House Cree Nation is asserting its traditional rights over the Saskatchewan River Delta.

The First Nation made a special declaration Thursday morning to protect and sustain the area in northeastern Saskatchewan.

The wetlands are home to a number of migratory birds and other species.

They also serve as a filter for the Saskatchewan River and storage chamber for carbon from the air.

Cumberland House Chief Rene Chaboyer said the E.B. Campbell Dam is one of the problems threatening the sustainability of the wetlands.

“It’s a bad design, right,” he said. “Any dam that stops water, or sediment, chokes the natural flow so that species in our delta are all slowly decaying, dying. There’s got to be a better way.”

Gord Vaadeland is the executive director of the Saskatchewan chapter of the Canadian Parks and Wilderness Society.

He said Saskatchewan has lagged in terms of environmental protection when compared to other provinces and the declaration presents a tremendous opportunity for the government to come to the table and work with First Nations like Cumberland House.

“The more we see things like this where a First Nation asserts leadership, the better chance we have to speed that up (environmental protection),” he said.

Vaadeland said the total delta area, which includes portions of both northern Saskatchewan and Manitoba, is just under a million hectares.

The declaration was made at the Cumberland Crossing Inn in Prince Albert.