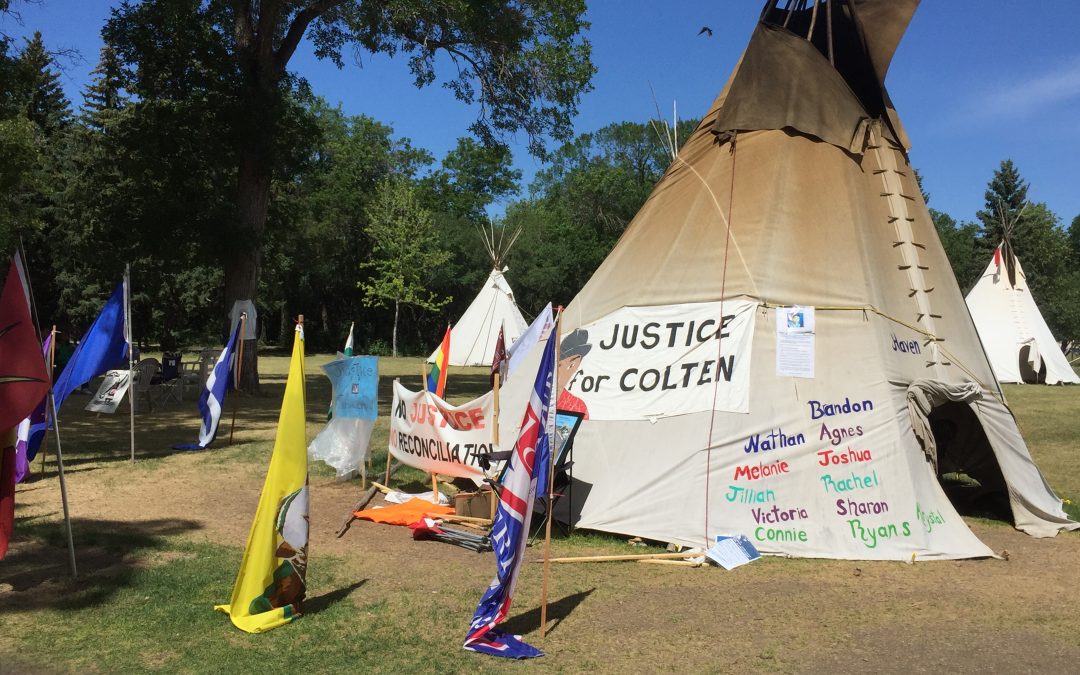 The Saskatchewan Court of Appeals is reserving its decision on whether to dismiss an appeal by an Indigenous protest camp, which occupied Wascana Park for 197 days in 2018.

The Justice for Our Stolen Children Camp, which established a lone tipi on the west lawn of the Legislative grounds was protesting for greater Indigenous child welfare policies.

On June 18, 2018, several protesters were arrested and detained for approximately four hours, as Regina Police moved in to dismantle the camp, although in a culturally sensitive manner by allowing the sacred fire to burn out naturally.

Several of the protesters barricaded themselves to the tipi. Those arrested were not charged in the incident.

Shortly after the camp’s dismantlement, multiple tipis were erected, occupying much of the west lawn.

The Provincial Capital Commission went to court seeking to have the camp vacated, claiming the occupants were trespassing and did not acquire the proper permits to be in the Park.

The protesters argued that their Constitutional Rights were violated, namely the right to freedom of expression and arbitrary detention.

The court sided the government and the camp was again dismantled permanently in August.

Today, the Provincial Capital Commission argued that the Appeal is moot as the bylaws, which governed the Park in June 2018 have since been repealed and replaced.

New bylaws were released in March, after a September ruling on a similar Indigenous protest camp in Wascana Park. Tristen Durocher was protesting high suicide rates in Northern Saskatchewan, and began a 44-day hunger strike in July 2020, ending his protest in September.

Yet the court ruled the bylaws infringed on Durocher’s freedom of expression and religion rights.

The province did not appeal that ruling, opting to rewrite the bylaws.

However, Dan Le Blanc, the lawyer representing the Justice for Our Stolen Children Camp argued that the appeal is centered on the events of June 18, and not of the Wascana Park bylaws, seeking to have the court affirm his clients’ rights were violated.

He said his clients camp and Durocher’s encampment were similar in that it involved Indigenous People, a single tipi and largely had the same cultural components.

However, attorney Jared Biden for the PCC countered that the Durocher camp was initially classified as a ceremony, involved a lone protester, who was solely responsible for the camp and that he had an end date for his protest. Biden said the Justice for Our Stolen Children Camp appeared to be indefinite, became too large with an estimated 21 tipis and did not have clear leadership, posing significant responsibility challenges.

The Regina Police Service too wants the appeal dismissed arguing that non-existing laws cannot be litigated in court, making the argument moot.

The Appeals Court said it would release a written decision at a later date.