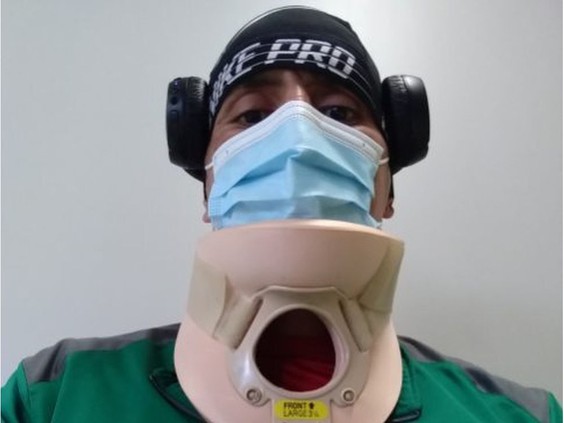 An Indigenous man living in Saskatoon is recounting a recent interaction with city police, which left him with serious injuries.

William Favel said he just completed a 20km run in the morning of April 2, near 20th Street and Avenue N, when he noticed a police cruiser pass him several times.

After a third pass, Favel said officers stopped and approached him demanding his identification. “

The city police drove by me already three times. I seen them.  I had my headphones on. I had my mask on. I had my bag,” explained Favel. He was wearing Saskatchewan Roughrider green colours, which he said officers interpreted as colours belonging to a youth gang in the city. Favel is 42-years-old.

As he attempted to cross the street, police claimed that Favel was being detained for jaywalking, and would now need to identify. Favel refused and was temporarily arrested.

“They cranked my arms behind my back.  My elbow dislocates as they put the handcuffs on me,” Favel said. “They throw me down face first in the dirt. The other cop, probably 250 pounds comes into flying knee to my head.”

In the panic and hysteria of the situation, Favel managed to capture an 11 second video of the police encounter, in which police state he is being detained, then arrested.

Saskatoon Police said that Favel was ticketed for obstruction, but no criminal charges were laid.

Favel said he was carrying a satchel containing food and a pouch of sage. As the bag was searched, an officer questions Favel’s beliefs with the sage.

Favel would go to the hospital for examination, where x-rays proved negative for broken bones in his neck and elbow, only inflammation.

“My kids think first responders are all bad. They discriminate me to humiliate me. Its systemic racism, racial profiling. They hurt me physically, mentally, emotionally and spiritually. They broke me right down,” said Favel.

The Congress of Aboriginal Peoples took up Favel’s cause, demanding accountability for officers involved.

“We’re calling on the officers in question to be suspended or put on desk duty. We don’t need these kinds of officers roaming our streets, particularly in the area where Indigenous people live and work,” explained CAP Vice-Chief Kim Beaudin.

The incident has been forwarded to the Public Complaints Commission for review.

“If a complaint about officer conduct is received, it is investigated with oversight by the Public Complaints Commission. This independent process is important and must be allowed to take place so that all details are known before we respond,” said Saskatoon Police Chief Troy Cooper. “Whether a complaint is made or not we also have a supervisor review files and a use of force evaluation that occurs internally – a provincially standardized process that has not yet been completed.”