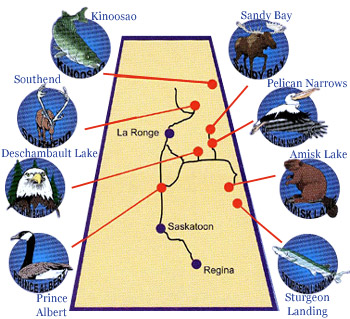 Most voters of the Peter Ballantyne Cree Nation go to the polls to elect a new chief and council on Tuesday.

Nevertheless, due to a COVID-19 outbreak, voters in Sturgeon Landing will not be participating in the election.

This means the results for chief and the council position for Sturgeon Landing may not be known for some days yet until it is safe for voters to cast ballots.

The race for chief was left wide open after Peter A. Beatty, who had held the position since 2013, decided not to seek re-election.

MBC Radio talked to five of the six candidates running for chief.

Most of the candidates talked about how spread out the communities of the northern Saskatchewan First Nation are and the challenge of making all members feel connected to the leadership.

Economic development, housing, health care and education topped the list of priorities for a number of candidates.

Some talked about the need to use technology and social media as a way of connecting with more remote communities.

And most candidates were comfortable with staying the course set by Beatty and before that the late Ron Michel.

Two of the five candidates running for chief MBC talked to are from Pelican Narrows which is the largest PBCN community.

Both Weldon McCallum and Jason Linklater have served on band council.

Both say they would take the knowledge learned from working with Beatty, Michel and other First Nations leaders and apply it to the current role of chief if elected.

“I look up to great leaders such as Peter A. Beatty and former grand chief (of the Prince Albert Grand Council) Ron Michel,” McCallum said. “They’re elders from our community of Pelican that I look up to and I want to continue on their legacy for our people in PBCN.”

Linklater added he believes it would be his job as chief to get buy-in from all of Peter Ballantyne’s seven communities when forging ahead on policy.

“My approach that I will be utilizing will be a community driven approach,” he said. “I want to bring people together so that we can work on things in unity and for the betterment of our communities now and into the future.”

Karen Bird and Simon Jobb are both from the community of Southend.

Bird, who works as an administrator and consultant, has run for chief in two previous elections.

“I have been given much and I want to give back,” she said on her reasons for running in the current election.

The housing crisis in PBCN communities has been a major focus of her campaign.

Jobb served as a councillor for Southend from 2013 to 2018 and said after some time off he is ready to re-enter the political fray.

“I stepped down because my daughter needed more of my time,” he said. “So, I took a break from politics and now I’m back and seeking the position of chief.”

Roland Natewayes is from the community of Sandy Bay where he has served as a band councillor in the past.

He said governance has been a key plank of his campaign.

“We’ve got to determine where were at, we’ve really stressed our accountability, transparency and fairness throughout the membership,” Natewayes said.

An advance poll for the election was held on April 8.