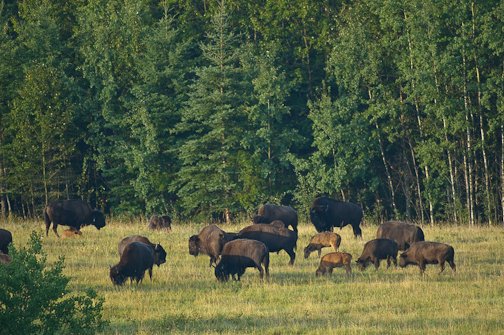 Joanne Watson, a resource management officer with P.A. National Park said when staff counted the animals from the air this winter they had one of the best surveys they’ve ever had.

“We are seeing some progress with the bison herd,” she said.

Watson said the Sturgeon River Plains Bison Herd is currently estimated to be made up of around 120 animals. This is down from a peak over 10 years back when it was estimated to be over 400.

The drop in population numbers can be attributed to a few factors. One being an anthrax outbreak which killed a number of animals and there was also an issue of some over hunting.

Watson explained they have been able to deal with the over hunting issues by encouraging traditional hunters to not take female bison.

“Over the last few years the harvesting rates have really decreased and harvesters have recognized harvesting male bison as opposed to females is probably better,” she said.

Watson said the population can also be effected by natural factors like the climate and natural predators such as wolves. Through research it has been found the wolves are only taking sick or weak bison.

“We’re pretty optimistic that together we can start seeing the population increase again over the next handful of years,” she said.

In regards to what would be ideal population numbers, Watson said she is hopeful the herd will grow back to where it was previously with 450 animals. Watson explained this number is likely the biggest they want it to get as if the herd is too big it could cause problems with near by land owners.

“We wouldn’t want the herd to get more than 450 to keep those conflicts at bay,” she said.

Watson added bison are important animals for the park for a number of reasons, both environmentally and culturally. She said the overall echo system benefits from having a healthy bison population.

“Plains Bison are known as a echo system engineer and so they actually help shape the landscape for all other native plants and animals,” she said.