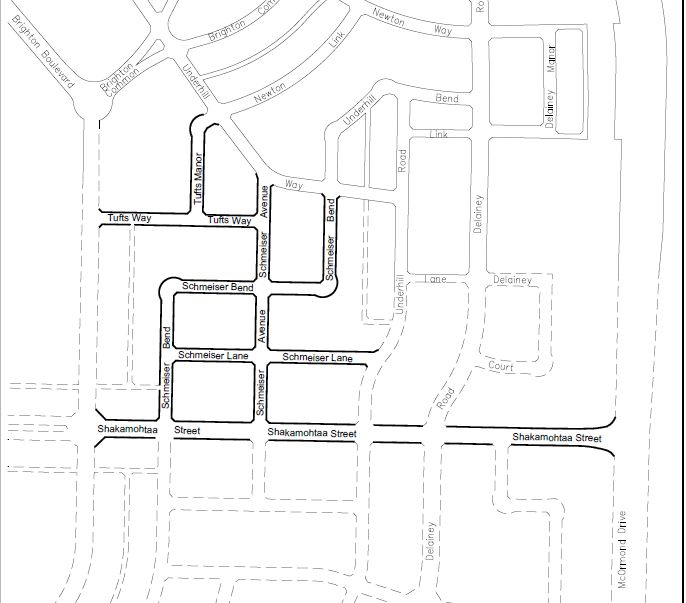 The City of Saskatoon has named its first street in the Michif language.

The name “Shakamohtaa” (shaa-KAM’-moh-TAHH’) was assigned to a street in the southeast quadrant of Brighton.

“Shakamohtaa” is the Michif word for “connect” and symbolizes the importance of coming together and building relationships.

“The Michif language is an integral language to this land,” said Mayor Clark. “While it is long overdue, I am glad we will see the Michif language reflected on this street in Brighton. Imagine the impact for kids growing up in this neighbourhood, living on or near Shakamohtaa Street. They will feel a greater connection to these roots and the beauty of the Michif language.”

The Métis in Saskatchewan speak three Michif languages. The most widely known Michif is a Cree-French mixed language composed of Plains Cree (nêhiyawêwin) with some Plains Ojibway (nakawēmowin) verbs/verb phrases and French (with some English) nouns/noun phrases. Northern Michif—a Cree-based language with a small amount of French word (noun) borrowings—is spoken in the northwest corner of Saskatchewan, with most speakers living in or near Ile-à-la Crosse, Buffalo Narrows, Beauval, and Green Lake, that according to the Gabriel Dumont Inst.

“I am happy that the City of Saskatoon is using our Métis language. It is our Michif language that gives us a community, culture, nation, and sense of belonging – all of which makes us Métis. This makes me very proud to have a street named in our language Michif; it will make a lot of Métis Elders and Nations very happy. It’s a good start to learning more about and understanding our Métis people and culture; I look forward to seeing more like this in the future,” explained Metis Elder Harriet St. Pierre who has lived in Saskatoon most of her life.

Since street names are selected during the neighbourhood planning stage, the physical street does not yet exist anywhere other than on planning maps. It’s expected that the road will be in place along with its accompanying street sign in about two years’ time.

(Photo courtesy of the City of Saskatoon)