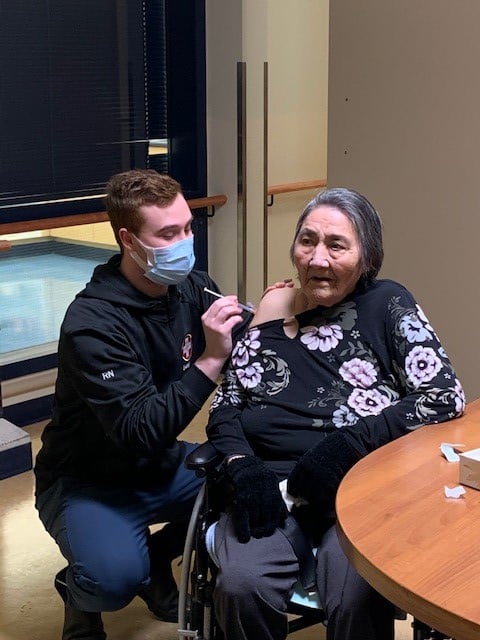 The Athabasca Health Authority in far north central Saskatchewan has received COVID-19 vaccines and are working to get them in people’s arms.

So far Keller said the authority has been able to inoculate 226 people as of Jan 11. He explained the local health authority is offering the vaccine to front line health care workers and residents over the age of 50. They have also inoculated four out of the five residents they have living in their long term care facility.

According to Keller there has been some hesitancy about the vaccine from some people and said there are also people who likely will decline to take it. So far though Keller said most people have been receptive.

He added they expected some people to have concerns about the vaccine, but said overall they are not worried.

“With some education, some discussion, that hesitancy has gone away and people have gotten the vaccine,” said Keller.

The health authority is facing some challenges in getting the vaccine into people’s arms. Keller said one of those challenges is when a vile is opened there are 10 doses inside which have to be used up in six hours.

“We want to make sure we have 10 people ready for the vaccine, if we don’t, maybe we have to push some people off to the next day,” he said.

As the vaccine is being rolled out the Athabasca region has seen the number of active COVID-19 cases climb up. Currently there are 23 active cases in the Athabasca basin. Recently the health authority has seen active cases in Stony Rapids, where previously the virus was being found primarily in Black Lake and Fond-du-Lac.

“We hope that the Stony Rapids numbers won’t climb, we’re concerned about the Black Lake numbers as we seem to be seeing a bit of spread to outside households,” said Keller.

Keller said the increase in cases can be traced back to people traveling and not following the public health orders, specifically having outside visitors into their homes.

“A lot of it is linked to the holidays and travel from down south into the basin, and certainly again people let their guards down, which isn’t any different from the rest of the province,” he said.

Going forward Keller said they are hoping to get a handle on the situation by reminding people to stay home and by asking people who are experiencing symptoms to get themselves tested.

“We’ll certainly get on top of this again,” he said.