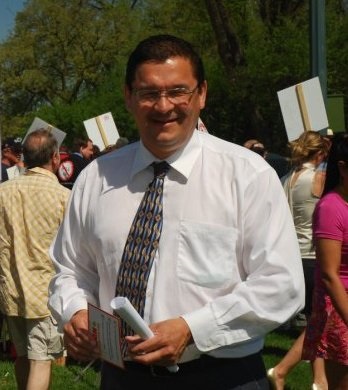 “We, of course, were quite stunned by the announcement. We had no idea where we could possibly get COVID-19 from. It just didn’t make any sense,” Belanger said.

“Because of in-home transmission, my wife and my grandson and I all tested positive for COVID-19.”

Belanger explained that he experienced the common symptoms associated with the virus, that being headaches and eventual loss of taste.

Yet he said there were three immediate challenges posed to his family. “First is that obviously you want to make sure that you are isolated and that you are not presenting any danger to anybody else,” Belanger recounted.

Belanger’s granddaughter, who shares the same home, tested negative, but needed to self-isolate. So, Belanger and his granddaughter moved into separate hotel rooms, adjacent to each other. The rooms were provided by the Métis Nation-Saskatchewan.

“We had to remove my granddaughter from the home. She moved into a hotel room, and they isolated me in the adjoining room,” Belanger said. “Of course, I couldn’t go into her room because she was negative and I was positive, but at the very least I was right next door to her to be able to provide her that support and certainly advice and to keep her company, so to speak, through text messages and telephone calls.”

Belanger said the second challenge he faced as he recovered was struggling with the isolation.

“As you struggle to regain your health alone in a hotel room, that is in itself a secondary challenge. Not just getting the initial shock of being tested positive. But the reality is that as you’re struggling there by yourself,” explained Belanger. “But you after the three or four days of going through the symptoms, your mind plays a lot of tricks on you. In my case, we’ve done it in hotel rooms. And that’s not fun either.”

The third challenge for Belanger was the present of “what happens now.” While he did recover from the virus, he still is at risk, although much lower of contracting it again. Belanger said he was fortunate enough that his diagnosis did not progress worse to hospitalization, adding this is a situation he wants no one else to experience.