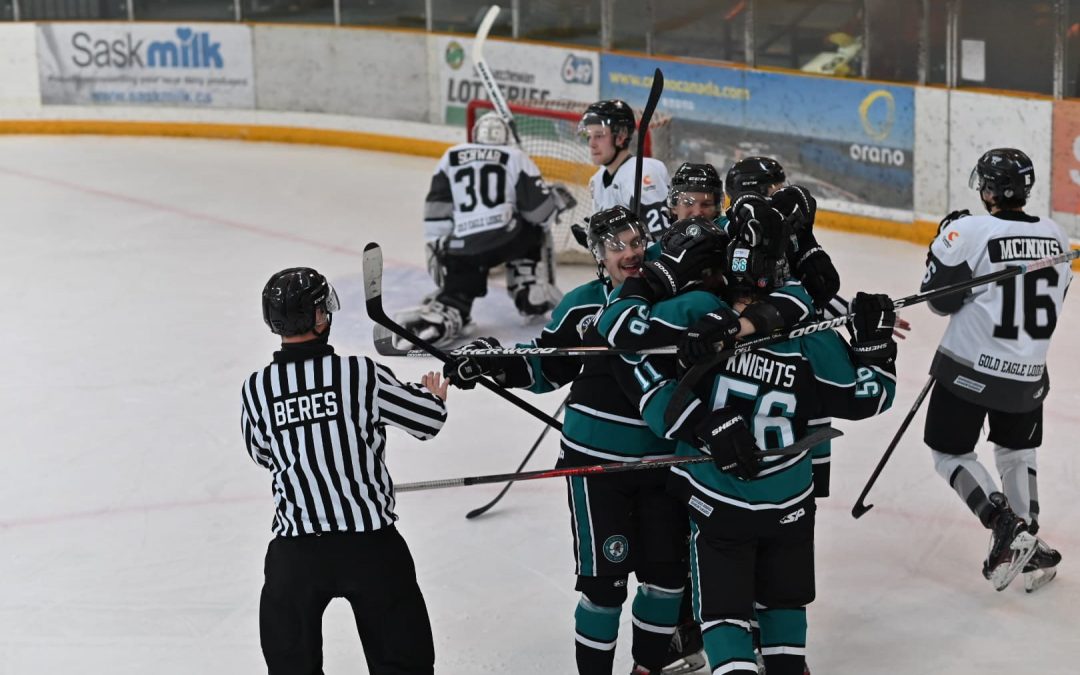 The La Ronge Ice Wolves closed out their weekend with a convincing 7-4 win over the Battlefords North Stars Saturday night at the Mel Hegland Uniplex.

“We were playing the right way, everybody was on the same page. We had some nice individual plays by guys, good on the power play. Other than the third period, we were pretty happy,” said Ice Wolves Associate Coach Gaelan Patterson.

The North Stars came out firing on all cylinders as Mason Richey beat Xavier Cannon upstairs just nine seconds into the game. The Wolves tied the game at one 5:53 into the first when Spencer Kennedy punched in his second of the season. La Ronge grabbed a 2-1 advantage at the 16:36 mark of the opening stanza when Will Smith wristed home his first goal in the SJHL.

The Ice Wolves added some insurance 4:58 into the second period after Kaiden Collumb batted in his second of the campaign, which made it a 3-1 contest. La Ronge went up 4-1 when Holden Knights recorded his third of the season 9:10 into the frame. The Ice Wolves took a 5-1 lead 11:02 into the second when Narek Aleksanyan fed Beau Larson, who notched his first SJHL goal.

“It just started in our zone, just a blocked shot, Mathieu (Belanger) got it and gave it to Narek (Aleksanyan), and lots of patience there, and I found the back of the net there,” said Larson.

Connor Gabruch would score on a breakaway at the 12:41 mark of the second stanza, which made it a 5-2 contest. Spencer Kennedy tallied his second of the evening with just 17 seconds remaining in the period as the Ice Wolves took a 6-2 lead into the third.

In the third period, Ryland McNinch and Connor Gabruch scored for the North Stars, but it was too little, too late and La Ronge hung on for the victory. Chad McIlwain added an empty-netter for his first of the season late in regulation as the Ice Wolves swept their weekend series with the Battlefords.

Xavier Cannon made his second straight start and he finished his evening with 32 saves. Austin Schwab got the nod for North Battleford and he recorded 15 saves on 20 shots before he was replaced by Kristian Lyon. Lyon made 14 saves on 15 shots in his relief appearance.

With the victory, the Ice Wolves improved to 2-1 on the season and they have won two straight games. La Ronge is back in action Tuesday night in Nipawin when they make their first trip of the season to the Cage to duel with the Hawks. You can catch that contest on MBC with Braden Malsbury, beginning with the pre-game show at 7:20 p.m.

Following Tuesday’s showdown in Nipawin, the Ice Wolves will get set for a home-and-home series with the Melfort Mustangs that begins next Friday night in La Ronge.