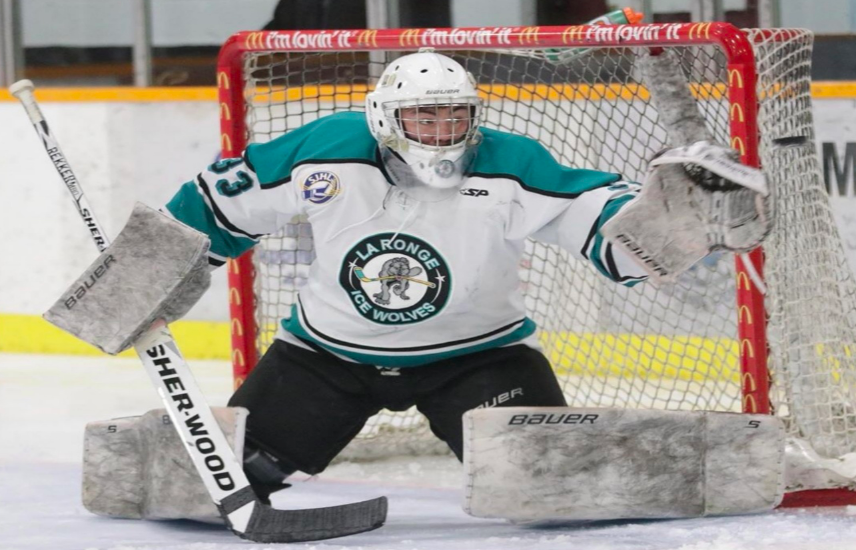 It’s something he has been working toward his whole life and now Alex Bell can say he has achieved his goal of playing for the SJHL’s La Ronge Ice Wolves.

The 19-year-old goaltender from La Ronge has earned a spot on the Ice Wolves for the 2020-21 SJHL season.

“It means a lot, honestly,” said Bell. “I’ve lived here my whole life —growing up, big hockey town, so it means a lot to me to represent not only like my family, but the community as well. I’m excited to get the season going here.”

The Ice Wolves say Bell is the first Lac La Ronge Indian Band member to sign with the team in over 10 years.

Alex spent the 2019-20 season in the NEAJBHL with the Lac La Biche Clippers. In 15 regular season games, he posted a sparkling 2.20 GAA and .932 save percentage.

“He went down to Lac La Biche and played a ton of games, really improved on his game,” said Ice Wolves Head Coach and GM Kevin Kaminski. “I know we’ve been working with our goaltending coach Kyle Sephton right now. He looks totally confident in there.”

After graduating from the La Ronge Minor Hockey system, Bell spent time in the U18 AA ranks with the Beardy’s Blackhawks and North East Wolfpack.

“My family billeted a lot, so I got to get close with the guys, I kind of want to do that this year too — I want to make an impact with the local kids and be a big influence,” said Bell. “Hopefully we can go pretty far in the season and bring a championship back home.”

Bell joins Liam McGarva and Xavier Cannon as the trio of goalies manning the crease for the Ice Wolves this season. Bell appeared in two pre-season games versus the Flin Flon Bombers this year.

Meantime, the Ice Wolves are back in action on Friday when they host the Battlefords North Stars at the Mel Hegland Uniplex. You can catch the game on MBC with Braden Malsbury, with the pre-game show kicking off at 7:20 p.m.

The Ice Wolves close out their weekend Saturday night at home versus the Battlefords.