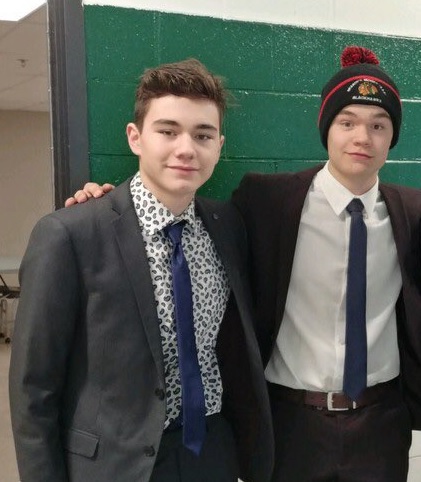 The La Ronge Ice Wolves have a handful of local prospects in the system who could be cracking the lineup in the coming seasons.

Defenceman Parker Layton and forward Cobe Delaney from La Ronge will both suit up for the Warman Wildcats in the U18 AAA ranks this season. They both played last year with the Beardy’s Blackhawks, who are no longer in the league.

Layton admits, it would be pretty cool to play for his hometown junior club alongside Delaney.

“Honestly, it would be a dream come true, I’ve played with Cobe for the past 13 years,” said Layton.

“I’ve played on his team ever since the first year of pre-novice and all the way through our careers. It would be a pretty crazy moment for both of our families if we could go on to play Ice Wolves together for as long as we can.”

Layton tallied 10 points in 44 games on the back end last season with Beardy’s, while Delaney recorded 12 points in 43 games. Both players attended camp with the Ice Wolves this year. Delaney is a member of the Lac La Ronge Indian Band.

Forwards Trever Sanderson and Sage Roberts are also Lac La Ronge Indian Band members and prospects with the Ice Wolves. Roberts will play for the Parkland Elks U18 AA team in Shellbrook this season, while Sanderson is attending a prep school in British Columbia.

Roberts had 17 points in 29 games during the 2019-20 campaign with the North East Wolfpack U15 AA team, while Sanderson recorded three points in 28 games with the Beardy’s Blackhawks U18 AAA club.

“He (Sanderson) was going to come to camp, but he couldn’t leave his bubble out there,” said Ice Wolves Head Coach and GM Kevin Kaminski. “Those guys got a taste of kind of what junior hockey is all about. A lot of those kids that come in, even out of midget, they realize how much more work there is to just playing.”

Rounding out the local prospects for the Ice Wolves is 2004-born forward Jacob Cossete from Air Ronge. Cossette had 41 points in 33 games with the Beardy’s Blackhawks U18 AA team last season. He is making the jump to AAA this year with the Tisdale Trojans.

“I want to be one of the top guys that the coach can go to,” said Cossette. “I think with my size and ability to score too is really important.”

Meantime, the Ice Wolves continue preparations for the 2020-21 SJHL season, but no clear start date for the campaign has been established.