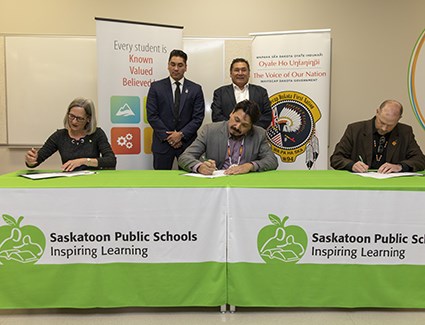 The two parties, along with the federal government, are part of the tripartite agreement.

The students first transition to Chief Whitecap School in Saskatoon where upon graduating the Eighth Grade, they move on to various high schools in the city.

The tripartite agreement allows for “sustainable, predictable and flexible” funding that will follow students through the school system.

Colleen MacPherson, board chair for Saskatoon Public Schools, said the main purpose of the agreement is to allow Whitecap students to smoothly transition their educational studies from the First Nation to Saskatoon.

“It creates seamless education for these students as they move from the reserve school into the Saskatoon Public’s (Schools),” she said.

MacPherson said funding for the partnership allows students from the First Nation to continue cultural and language programming as part of their education.

“In the past, that funding for things like language and cultural programming would only be available to students who were being educated on reserve, but with this new tripartite agreement the funding will now follow the students.”

MacPherson said this in turn benefits students as it allows them to learn about their culture and themselves throughout their primary and secondary education.

“I think it’s fair to say that children do best when they see themselves reflected in their environment.”