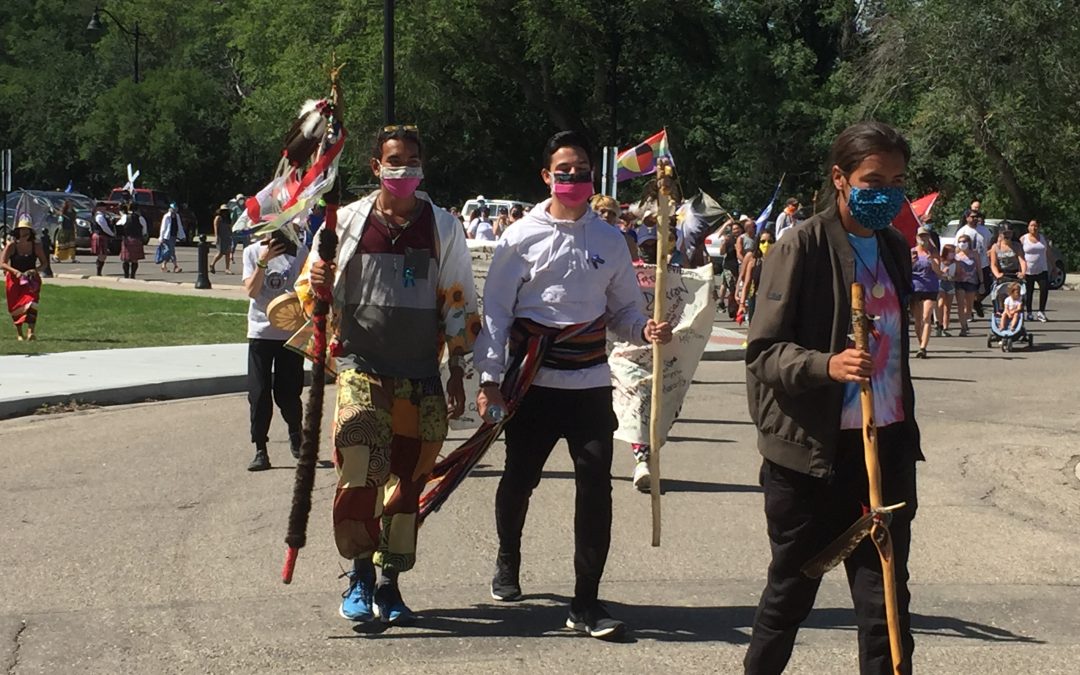 The journey of two northern men to raise awareness to high suicide rates in the North has reached its final destination.

On July 2, Tristen Durocher and Christopher Merasty began walking the 635 KM from La Ronge to the Legislative Assembly in Regina. They got here Friday.

The walk was initiated after the Sask. Party government voted against an NDP private members bill, legislating the creation of a suicide prevention strategy.

That vote took place in June, as 44 Sask. Party MLA’s voted unanimously against, while the 13 NDP MLA’s were in favour.

“All 44 said no. It was a unanimous display of a lethal indifference that in 2020 is absolutely intolerable. And that is why we are here, that is why we walked here,” said Tristan Durocher at the Legislature.

The province in May released its own suicide prevention plan and committed $1.2 million in year-one for implementation.

Yet Durocher said that plan does not go far enough as it is not accountable, which the NDP legislation would have been.

Between 2005 and 2016, approximately 144 people in the province take their lives each year and suicide is the leading cause of death in the North.

“To have several reserves across Northern Saskatchewan declare states of emergency because of suicide crisis and to only receive maybe a weekend with the Premier and a few photo-ops, followed by more inaction is unacceptable,” explained Durocher.

After a few speeches a teepee was erected on the west lawn of the Legislative grounds, where the “Justice for Our Stolen Children” camp took place two years ago.

Representatives with Wascana Park Authority, which is in charge of the grounds told Durocher that a teepee would be in violation of bylaws.

Durocher pushed on and established a camp, vowing to enter into a hunger strike, until the Legislature was reconvened and that the government pass meaningful legislation to address suicide prevention.

Durocher said he would only drink tea and remain in place.

Rural and Remote Health Minister Warren Kaeding has offered several times to meet with Durocher to discuss his concerns.

“I recognize that the tragic loss of a person by suicide is felt by family, friends and the entire community. Addressing suicide is a priority for our government,” said Kaeding. “Our government is committed to working diligently to address mental health concerns to prevent suicide, and to respond in meaningful ways to the needs of individuals and families within Saskatchewan.”

Yet Durocher claims that face-to-face meeting had several conditions, including meeting alone and away from the media.

“Tristen and the rest of this group have come seeking answers and action. That’s why I’m calling on the Premier and the Sask. Party government to work with us to reconvene the Legislature for an emergency session to pass meaningful legislation to reduce suicides in this province,” NDP leader Ryan Meili said.

Adjacent to the teepee are approximately 100 sign-style photographs of Saskatchewan people who have committed suicide, to serve as a reminder for those who visit the devastation suicide causes.

(Photo: Tristen Durocher arrives at the Legislature. By Dan Jones)