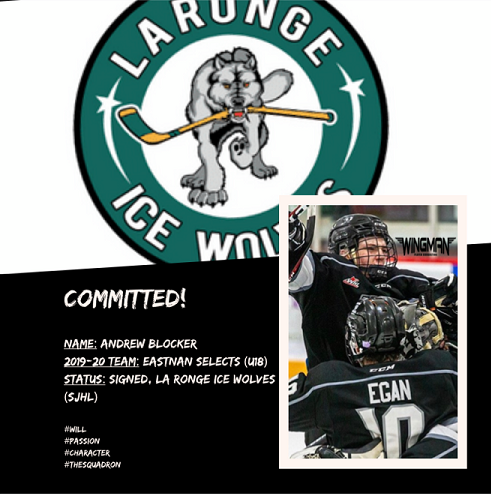 The La Ronge Ice Wolves say 2002-born forward Andrew Blocker has committed to the team for the upcoming season.

Blocker, a Dugald, MB product, had 27 points in 32 games during the 2019-20 season with the Eastman Selects Midget AAA club.

“Andrew comes highly reccomended by our scouts Ryan Goethals and Rob Fiola,” said Ice Wolves Head Coach and GM Kevin Kaminski. “Ryan says he does everything very well with a relentless work ethic and plays with an edge. He’s a puck hound and creates turnovers with his quickness. He has deceptive speed and sees the ice well to make the little plays — and he can finish. He has a great attitude and is willing to learn to keep making him and his teammates around him better.”

“Thank you to the coaching and scouting staff of the La Ronge Ice Wolves for recruiting me, and believing in me,” said Blocker. “It’s an honour and a privilege to be part of the Ice Wolves’ family. Now it’s time to get to work.”

Blocker also appeared in two games this past season with the MJHL’s Portage Terriers.