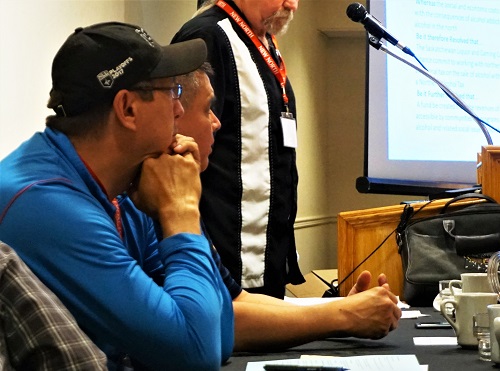 Several people are expressing frustration that the provincial government will not be conducting a full forensic audit into the financials of the Northern Village of Pinehouse.

Multiple accounting violations under the Northern Municipalities Act were identified in a December report.

Despite the findings and recommendations Government Relations Minister Lori Carr said there is no need to further examine the financial of Pinehouse.

“No, I think that one of the things that are important to note here is that there was no wrongdoing, there was no evidence of fraudulent behavior on the amount of time they did the audit. So, going back would just be redundant,” Carr said.

“It is simply not acceptable for you, Madam Minister, nor the provincial government as a whole, to sweep under the rug what remains as a complete mess in Pinehouse Village affairs as revealed in the inquiry reports by Neil Robertson, William Vancise and auditors Grant Thornton,” stated D’Arcy Hande in a letter to Carr.

“Despite the tone of the Vancise report, he nevertheless recommends as did auditors Grant Thornton that the serious issues of legislative noncompliance with regard to Mayor Mike Natomagan and others in the village administration be studied in an expanded forensic audit.  This is the least that should be done to recover hundreds of thousands of dollars that rightfully should have benefited the people of Pinehouse.”

Hande’s Freedom of Information requests and lack of responses from Village administrators, sparked concern from the province’s Information and Privacy Commissioner, leading the government to launch an inquiry in 2018.

Another letter to Minister Carr said that not examining further is setting a bad precedent.

“Despite the Information and Privacy Commissioner’s findings of obstruction, confirmed by Neil Robertson in his inspection report last March, William Vancise chose to overlook all the abuses and give the mayor, council and administrator a free pass.  And you as Minister of Government Relations have reinforced with the Pinehouse leadership, and all municipalities around the province, that it is okay to gouge their citizens and to turn requests for accountability down flat.  You have reinforced that by telling the village leadership there will be no consequences for their dishonesty and bad administration,” wrote Fred Pederson.