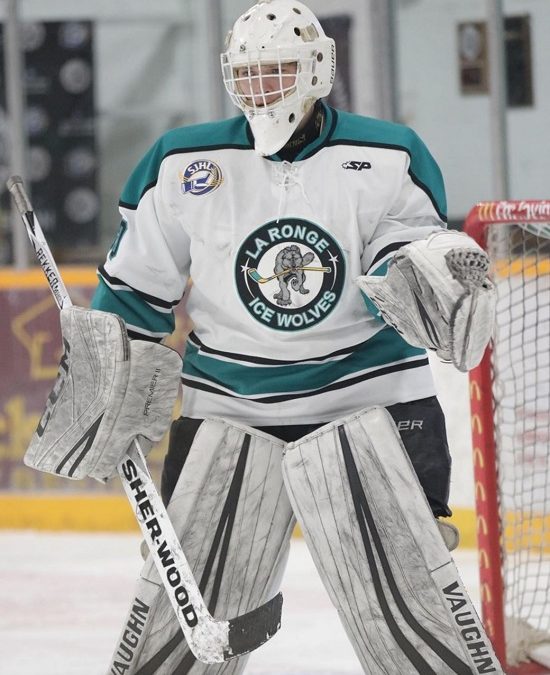 La Ronge’s Liam McGarva is in the running for the SJHL Top Goalie award.

The Fort Saskatchewan, AB product is the nominee for the league’s Sher-Wood Division.

“It feels great, especially coming from where I was last year,” said McGarva. “I know a lot of the guys on our team played in the KIJHL too. It’s good to be recognized, but it’s a team statistic too. We are playing well defensively, so it is good.”

Heading into Wednesday’s action in the SJHL, McGarva had 23 wins and four shutouts, which had him tied for the league lead in both categories.

“I think it’s very well-deserving,” said Kevin Kaminski, the head coach and general manager of the La Ronge Ice Wolves. “I know at times, we haven’t played very well in front of him when we have some little three or four-game slides. Like I have said, he’s been there for us all year long.”

McGarva will be competing with Melville’s Berk Berkeliev and Notre Dame’s Riley Kohonick for the top goaltender prize. Kohonick has recored a .920 save percentage this season, while Berkeliev has a .928 save percentage.

Meantime, La Ronge forward Ty Budai was the runner-up for the SJHL Player of the Week award. In four games last week on a southern road trip, the De Winton, AB product tallied five points. The 20-year-old forward has eight points in 10 games since being acquired at the trade deadline from the Fort McMurray Oil Barons in the AJHL.

The Ice Wolves are back in action tonight (Wednesday) at home when the Estevan Bruins come to town. The puck is scheduled to drop at 7:30 p.m. from the Mel Hegland Uniplex. The Ice Wolves will search for their third straight win, while the Bruins will look to respond after falling 9-2 in Melfort on Tuesday night.