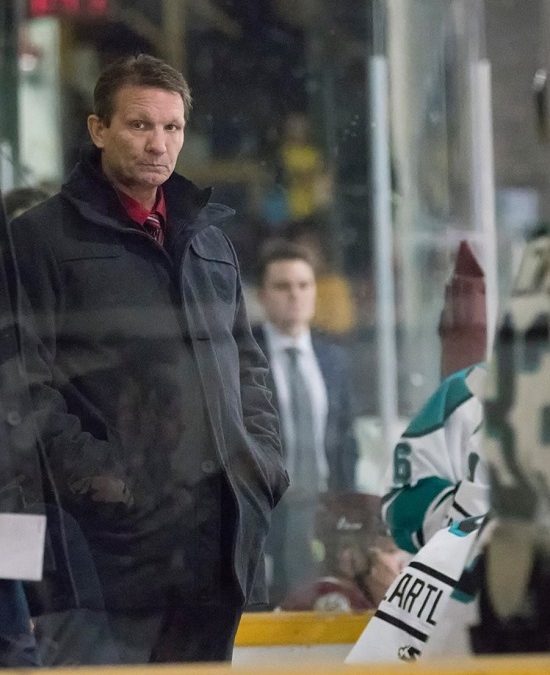 Kevin Kaminski of the La Ronge Ice Wolves has been named the SJHL Coach of the Year.

Kaminski, who is in his first season as the bench boss in La Ronge, will share the award with Brayden Klimosko of the Battlefords North Stars.

“It’s a great feeling, especially when you are recognized by your peers,” said Kaminski. “Congratulations to Brayden, what an outstanding year Battleford has had this year. They were the most consistent team and it’s well-deserved for him.”

Kaminski has guided the Ice Wolves into the playoffs for the first time since 2016. La Ronge currently sits fourth overall in the SJHL standings with its 31-19-6 record. With two games remaining on their regular season schedule, the Ice Wolves have 42 more points than they did last season.

Kaminski, a Churchbridge, SK product, came to the Ice Wolves after spending three seasons as the head coach of the WSHL’s Fresno Monsters. He also coached at the pro level for 14 years in the United States.

He was quick to credit the work of Gaelan Patterson, who is La Ronge’s associate coach.

“Personally, I want to thank the board for giving me this opportunity and believing in me to bring me to La Ronge,” said Kaminski. “I gotta thank Patty, my assistant coach, who has been a big part of our success and all of the stuff that he’s done. He’s made things a lot easier for me to deal with other stuff when he’s doing video and everything else.”

The Ice Wolves will play their last home game of the regular season Friday night when the Flin Flon Bombers come to town for a 7:30 p.m. puck drop.

The Ice Wolves will then finish out the regular season Saturday on the road in Flin Flon. You can catch Saturday’s matchup live on MBC Network Radio with Braden Malsbury. The pre-game show gets underway at 7:15 p.m. Following Saturday’s contest with the Bombers, the Ice Wolves will get set for the playoffs, but it is not clear yet who they will play.

Meantime, the Ice Wolves have announced details on their annual spring camp. The camp will run Apr. 24-26 in Saskatoon at the Harold Latrace Arena.

For more details on the camp, you can visit the team’s social media channels.