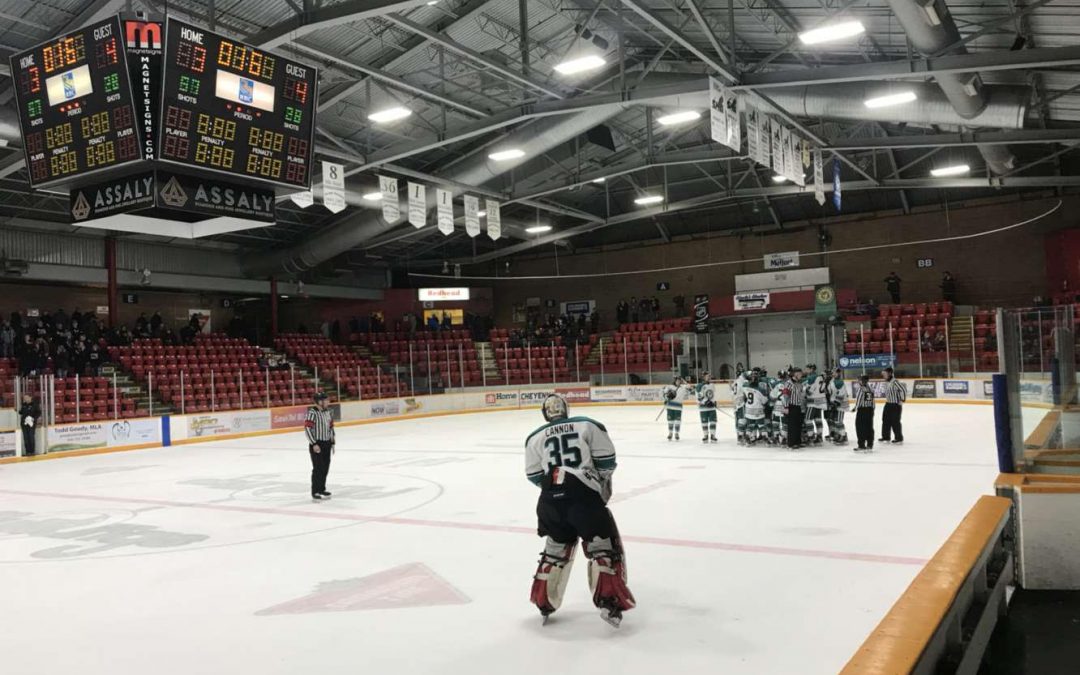 The La Ronge Ice Wolves found a way to get it done Wednesday night in Melfort when they scratched and clawed their way to a 4-3 victory in overtime.

“I think we were pretty happy with that result,” said Ice Wolves Associate Coach Galean Patterson. “We could have smothered them I thought in the first. I don’t think they played that well in the first. We were in control there up 2-0 (in the second) and then we kind of let them come back in, but we got the extra point.”

Booker Chacalias opened the scoring 15:19 into the first period when he picked up the puck in the right circle and wired a rocket upstairs past Shawn Parkinson, who stopped 24 shots in the loss.

The Ice Wolves took a 2-0 advantage 48 seconds into the middle frame when Ben Manson sent a shot on net from the right point that wobbled around and fooled Parkinson. Dylan Ashe would redirect an offering home from the point 6:22 into the frame, which cut La Ronge’s lead to one.

Colton Schell tied things at two on a shorthanded opportunity 10:51 into the second. The Ice Wolves took a 3-2 lead 12:49 into the period when Daylon Mannon banked home his 32nd of the year.

Melfort tied the game at three on the power play just 12 seconds into the third period when Tian Rask ripped home a rebound past a sprawling Liam McGarva, who was sensational in the La Ronge net and made 54 saves for his league-leading 22nd victory of the season.

It looked like the game was going to a shootout, but with just one second remaining in overtime, Chad McIlwain potted his seventh of the season. With the goal, McIlwain extended his goalscoring streak to four games. McIlwain admits, it was a greasy road win.

“That was Killer’s message before the game, be road warriors out there tonight, I think that’s exactly what we were,” said McIlwain. “We battled through, we persevered and at the end of the day, the hard work paid off.”

With the win, the Ice Wolves improved to 26-18-5 on the season, which now has them tied with the Nipawin Hawks for third place in the SJHL standings. Both teams currently have 57 points on the year after the Hawks dropped a 5-2 decision in Estevan on Wednesday. Meantime, La Ronge won the season series with Melfort 5-3.

La Ronge will now enjoy some time off before starting a four-game road trip next Tuesday night in Melville versus the Millionaires. You can catch next Tuesday’s game on MBC Network Radio with Braden Malsbury. The pre-game show gets underway at 7:15 p.m.

Following Tuesday’s game, the Ice Wolves head to Estevan next Wednesday to battle the Bruins for the third time this season.