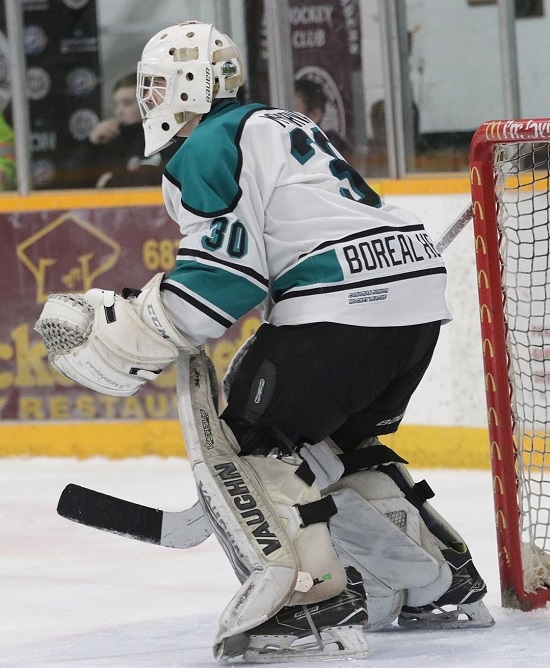 The accolades keep piling up for the La Ronge Ice Wolves.

Liam McGarva is the SJHL Goalie of the Week for the third time is season. He posted a 28-save shutout versus the Weyburn Red Wings last Wednesday. He followed that up with a 40-save victory against the Estevan Bruins last Friday evening.

McGarva was quick to credit his teammates for the recent success.

“I was seeing the puck well, everyone did a good job so I could see the puck from the blue line with the far shots,” said McGarva. “It always helps when we score a pile of goals, so it makes my job a bit easier.”

The Fort Saskatchewan, AB product currently leads the SJHL in wins with 21 and is tied for first in shutouts with four.

“He’s readjusted to playing his game,” said La Ronge Ice Wolves Head Coach and GM Kevin Kaminski. “It showed in the shutout (against Weyburn). I think Estevan had over 40 shots in the 9-2 win, but it seems like he’s more composed and he’s seeing the puck better.”

Daylon Mannon of the Ice Wolves was the runner-up for the player of the week honours. The Fresno, CA product had four goals and eight points in three games last week.

La Ronge forward Holden Knights is the runner-up for the SJHL Rookie of the Week prize. Knights had three goals in three games last week. He has four goals in five games since coming over in a trade with Salmon Arm.

The Ice Wolves are back in action Wednesday in Melfort when they take on the Mustangs for the eighth time this season. La Ronge leads the season series 4-3.

You can catch Wednesday’s action on MBC Network Radio with Braden Malsbury. The pre-game show gets underway at 7:15 p.m.