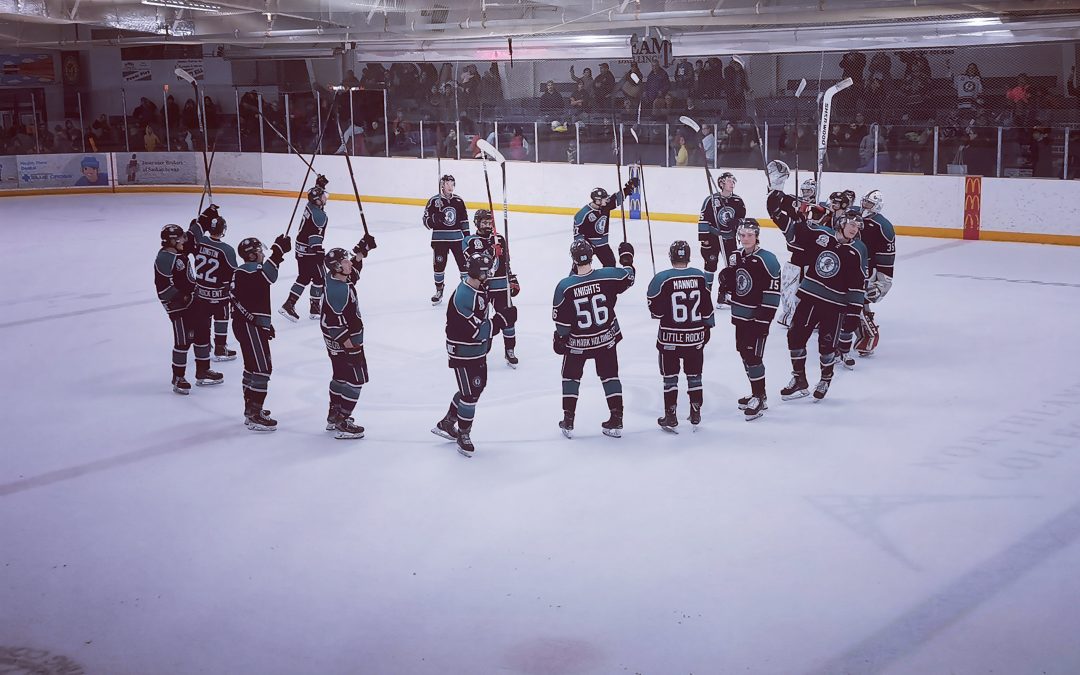 The La Ronge Ice Wolves recorded their third straight win Friday at home when they edged the Flin Flon Bombers 4-3.

“I thought we started out good and then kind of got back on our heels a little bit,” said Ice Wolves Head Coach and GM Kevin Kaminski. “They (Flin Flon) got the power play goal and we gave up too many opportunities in the slot again, but they (La Ronge) responded in the second period. That was Wolves hockey right there. They were relentless on the puck pursuit, being physical. We had traffic going to the net front and it made it difficult for the goalie.”

The Bombers opened the scoring 2:26 into the first on the power play when Tristan Lemyre sent a rocket past Xavier Cannon from the left circle. Cannon made several massive saves in the first period and he recorded his eighth win in the SJHL.

The Ice Wolves looked like a very motivated team in the second period and they tied the game at one 1:16 into the stanza when James Philpott beat Cal Schell from the left point for his 10th of the season. La Ronge took a 2-1 advantage 6:27 into the frame on the power play when Spencer Kennedy tucked home his 13th of the campaign past a sprawling Schell.

The Ice Wolves went up 3-1 9:35 into the period after Chad McIlwain’s eighth of the campaign in tight. La Ronge took a 4-1 advantage 11:34 into the second when Kyle Ford potted his 16th of the season at the side of the net.

Dane Hirst and Zach Bannister would both score in the third period for Flin Flon, but the Ice Wolves hung on for the victory.

“We really picked it up in the second period, started playing our game that we should play all the time, “ said La Ronge forward Spencer Kennedy. “Cannon was in the pipes, kicking for us and he made a couple huge saves in the first to keep us in it.”

Local product Cobe Delaney made his SJHL debut on Friday for the Ice Wolves. Delaney is a 2003-born forward and spent the 2019-20 season with the Beardy’s Blackhawks in the Saskatchewan Midget AAA Hockey League.

“It was great, once I got used to the speed and stuff, I was good to go,” said Delaney.

With the win, the Ice Wolves improved to 32-19-6 on the season, which still has them holding down fourth place. The Ice Wolves lead the season series with Flon Flon 5-4 following Friday’s victory.

La Ronge will conclude its regular season schedule Saturday in Flin Flon versus the Bombers. You can catch the action on MBC Network Radio with Braden Malsbury. The pre-game show gets underway at 7:15 p.m.

Meantime, the Wolves have recorded points in six straight games and the lowest they can finish is fifth in the overall standings.